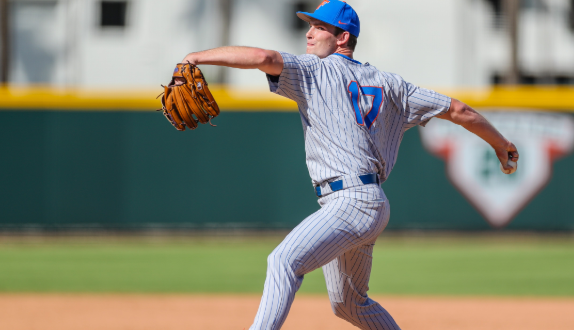 Florida Gators baseball is off to its best start ever.

The top-ranked Gators downed the Florida Atlantic Owls 7-3 in West Palm Beach on Tuesday night. Florida now has a school-record 12 straight wins to start a season.  Florida head coach Kevin O’Sullivan said it was great to play in front of Gator fans who otherwise can’t be in the stands in Gainesville on a regular basis.

“We played awfully well tonight. We played great defense,” O’Sullivan said. “The crowd was outstanding. And what can you say about our bullpen?”

Florida only needed two batters to get on the board in the first. Jud Fabian led off with a single and Austin Langworthy brought him home with a double.  After a Kendrick Calilao single and a bases-loaded hit-by-pitch by Kris Armstrong, Florida saw itself up 3-0 after one.

Much like his last start, lefty Jordan Butler retired two of his first three batters. Then FAU’s BJ Murray took a 2-0 pitch deep to left field for a two-run jack to close the gap at 3-2 in the first inning.

The Owls tied the game in the bottom of the second thanks to a lead off triple but Florida plated two runs in the the third to take a 5-3 advantage.

Outfielder Jacob Young led all Gator hitters with a 3-for-4 day along with two stolen bases. That earned Young his seventh straight multi-hit game.

O’Sullivan on Young’s versatility at the plate:

Neither team scored another run until the Gators added a couple insurance runs in the eighth.  As for the Owls, Florida’s bullpen threw up zeroes. Butler exited in the third inning leaving the pen to bridge the next seven.  No problem for David Luethje, Christian Scott and Ben Specht.

The Gator bullpen entered Tuesday with almost as many innings pitched as the starters plus a sub-two earned run average, 57 strikeouts and a .201 batting average against.

Luethje, Scott and Specht gave up no runs, five hits and one walk and combined for 11 strikeouts. Luethje got the win but Scott anchored the performance as he struck out five batters and allowed two hits in 3.1 shutout innings.

O’Sullivan on the improvement of Luethje, Scott and Specht:

Florida is back at McKethan Stadium on Wednesday night to face the Rattlers of Florida A&M. FAMU is 4-5 this season and coming off a series sweep of the Dayton Flyers the past weekend.

O’Sullivan on what lies ahead: