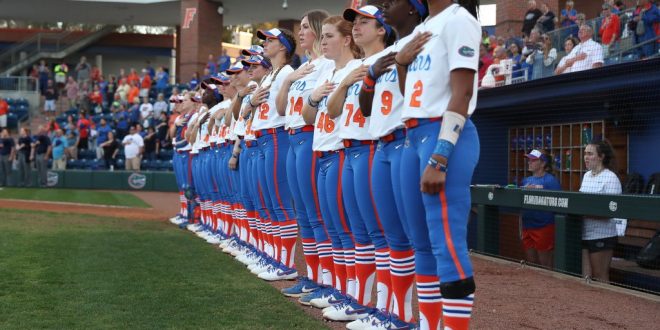 The Gators line up for the national anthem prior to Wednesday's win over FGCU. PHOTO CREDIT: @GatorsSB Twitter

The hunt for an SEC regular-season championship kicks off this weekend for the Florida softball team.  After earning the title for four straight years, Florida yielded the crown to Alabama last season. The Gators begin their redemption trail at home, facing the in-state rivals of the Crimson Tide, the Auburn Tigers.

This weekend marks the first time that Auburn and Florida play an opening SEC series in Gainesville. Previously, the two schools opened SEC play against each other at Auburn three times.

Florida won all three, and owned a 2-1 record in each of those series. Also, the Gators took two of three from Auburn in the last two series between the schools.

Florida’s recent success against the Tigers is evident. In the last match up, the Gators shut out Auburn, knocking them out of the 2019 SEC tournament. Then, Florida advanced to the finals and won the SEC tournament.

Last week, Rivera earned SEC Player of the Week honors due to a stellar offensive performance in the Tiger Invitational. She posted a .667 average and a 1.056 slugging percentage.

Gators back on track

Florida (18-4) struggled in its last series against then number 10 Louisiana. Despite leading in all of the games, the Gators lost two of three. They redeemed themselves on Wednesday night against Florida Gulf Coast, getting a home victory.

Through four innings, the game remained tied at one apiece. Finally in the fifth, freshman Baylee Goddard broke the game open with a two-run bomb to center. Natalie Lugo notched her fourth complete game of the year en route to a 3-1 Gators victory.

Tonight’s first pitch is slated for 6 PM at Katie Seashole Presley Stadium in Gainesville. Saturday’s game also is scheduled for 6 PM. The series concludes on Sunday at 3 PM.

@NevadaCullen
Previous Harrison Bader on his time as a Gator and beyond
Next Preview: Gators men’s basketball host Kentucky for Senior Day