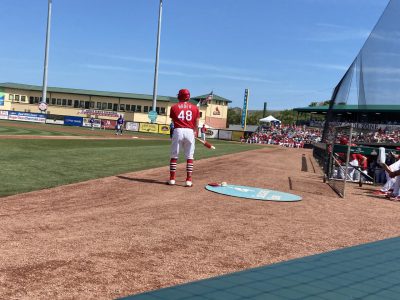 Harrison Bader on his time as a Gator and beyond

Cardinals center-fielder and Florida Gator baseball alum Harrison Bader has put together three great seasons with St. Louis. The Cardinals were in the NLCS last year but were eliminated by the Nationals. Bader and the Cardinals will look to take the next step this year, get to the World Series and win.

It doesn't get any Bader than that! pic.twitter.com/QGNNjhymss

Bader grew up in Bronxville, New York, and he said he played a lot of sports growing up but gravitated towards baseball. “There’s something so fun about the competition, and I was obviously pretty good at it… Baseball was my route,” Bader said.

Harrison Bader spent three years at the University of Florida, and he described his recruitment to UF as, “Super random,” and that he got very lucky.” Bader said he was a walk-on commit at the University of Maryland, and he just happened to be at a showcase tournament in Fort Myers, Florida. UF assistant coach Craig Bell was also at that tournament, and when he saw Bader in a home run derby, he recruited Bader that day.

Since Bader wasn’t actually signed to Maryland, he was still considered a free agent, and Florida was able to sign him. “The process was seamless, and it was really quick…and yeah it was the best three years baseball-wise I’ve ever really experienced,” said Bader.

Bader said a key figure during his time at Florida was assistant coach Brad Weitzel. “I wouldn’t be the player I am today, and wouldn’t have the work ethic if it wasn’t for Brad who really instilled it in me.”

Overall, Bader said of his time at the University of Florida, “I definitely was lucky, but they were lucky to get me for three years.”

Best memory from the Mac

With this being the last season of McKethan Stadium, Bader talked about his favorite memory from there. “I caught the last out my junior year against Florida State to go to Omaha. Just the feelings I had running, catching that ball, and running into my teammates on the mound…having it all come together my junior year was awesome.”

Bader as a Cardinal

The St. Louis Cardinals selected Bader in the third round in the 2015 draft. The road to the major leagues usually involves many long bus rides, and several games in cities you may not have heard of. However, Bader said he enjoyed all that came with minor league baseball.

Bader, in three seasons with the Cardinals, is hitting .236 and has hit 27 home runs with 86 RBI. Bader is also known for his great plays in center field. The Cardinals will need him to be a consistent hitter, and continue being a solid center-fielder for them to make another deep post-season run.

Heading to the games this weekend. Make sure you stop by Sonic on your way to the ballpark and grab an order of BaderTots. Find them at participating St. Louis area Sonic Drive-Ins! pic.twitter.com/laAZsg3VGE

Bader also is a rep for the St. Louis area Sonic Drive-Ins. So if you’re ever in St. Louis, be sure to try some BaderTots.