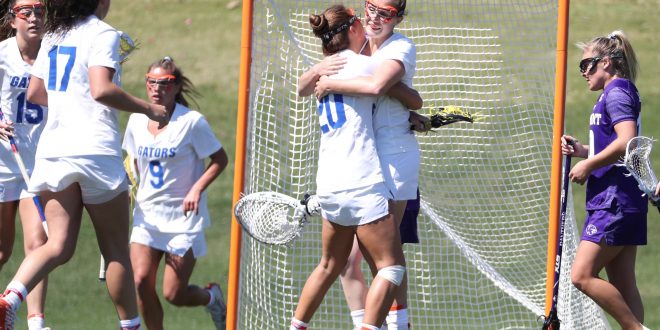 The Florida Gators lacrosse team has been on fire this season. They welcome No. 19 Navy today at 12 p.m. for a Top-25 matchup. They hold a 3-2 record this season against teams in the Intercollegiate Women’s Lacrosse Coaches Association (IWLCA) Top-25 poll.

In 2018, Florida beat Navy by a nine-goal deficit, the largest comeback in the history of the program. But, last year Navy put up a hard battle for Florida Lacrosse and beat them 14-13. Florida and Navy’s series is at a 1-1 tie right now and is our year to come back and prove their growth from last year’s game and how much they want it.

In the past week, three American Athletic Conference (AAC) honors have been awarded. Shannon Kavanagh has been awarded Midfielder of the Week. This is the team’s fourth midfielder of the week honor this season. Redshirt junior Brianna Harris and defensive junior Kaitlyn Dabkowski both earned a spot on the AAC honor roll.  This is Dabkowski’s second time receiving this award this season.

Florida redshirt junior Brainna Harris has a twin sister on Navy, senior Kayla Harris. This is the second time these two sisters will meet. In 2018, Kayla was the only sister in action as Brianna was out with an injury.

Navy comes to Gainesville with a 2-3 record on the year. They are only 1-2 on the year against ranked opponents. Leading the way for the Midshipmen is Kelly Larkin, who leads the team in scoring with 26 points. She is tied with Kayla Harris for the team-lead in goals. The two of them recorded 12 goals this season. Between the pipes is goalie Abbi Young, who is averaging 12.2 saves a game.

Today is the last home game until April 11th, while they take on the road for several weeks. They take on two more ranked opponents this season after Navy: No. 1 North Carolina and No. 13 Princeton.

Previous Gators host Quakers in Tuesday matinee
Next No.13 Georgia vs No.12 Ole Miss Open Up SEC Men’s Basketball Tournament