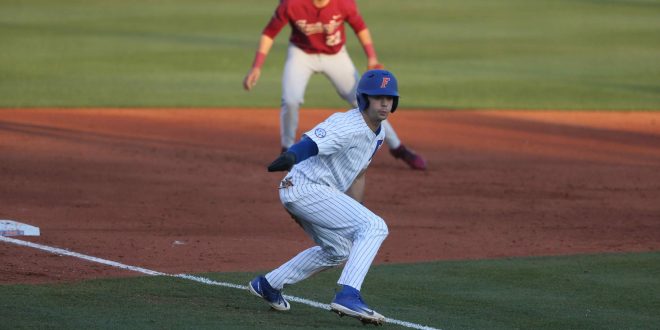 during the Gators' game against the Florida State Seminoles on Tuesday, March 13, 2018 at McKethan Stadium in Gainesville, Fla. / UAA Communications photo by Kelsi Bevington

The Florida Gator baseball team is set to host in-state rival Florida State on Tuesday at McKethan Stadium. This is the first of three games in the Sunshine Showdown series. Now 16-0 and the only undefeated team in Divison I baseball along with sporting a number one ranking, the Gators are off to a hot start.

Conversely, the 16th ranked Seminoles are coming off a 2-2 week. They beat Mercer on Tuesday but lost two of three to nationally ranked Duke on the road.

Looking at the record books, Florida has won 11 games in a row over Florida State. Additionally, the Gators have  won the last 16 of 17 games . But the most impressively, UF has swept the last four regular-season series.

Head Coach Mike Martin Jr. is in his first season with FSU after taking over for his father at the end of last season. Previously, under Martin the Gators held  77-76 all-time lead against the longtime Seminoles coach.

In Martin’s final season, the ‘Noles ended in Omaha. The team made the  NCAA Tournament field for a 42nd consecutive season. But, they drew their lowest seed ever. However, the team pushed through to win their opening game of the College World Series since 1999. The Noles lost in an elimination game against Texas Tech in the losers bracket to end their post-season run.

Right-handed pitcher Nick Pogue will take the mound for the Gators on Tuesday. The sophomore has made four appearances this season, pitched a total of seven innings and has given up five runs. For the ‘Noles, left-handed pitcher Antonio Velez will get the start. On the season, Velez has made five appearances and has only allowed a single run.

The first pitch has been set for 6:30 p.m. with television coverage on SEC Network+ and radio coverage on WRUF 98.1 FM.