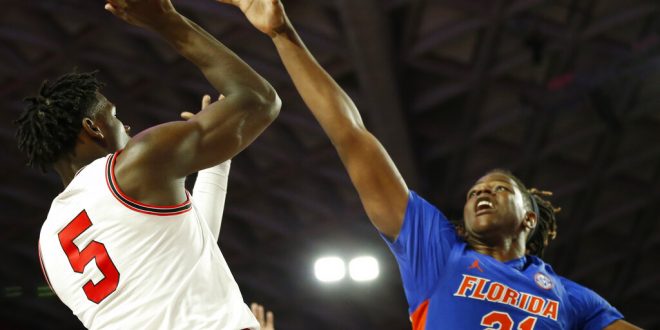 Just days after the 2019-20 season was placed on a sudden stop, Florida already finds themselves down another big man for the 2020-21 season. Junior forward Dontay Bassett has entered his name in the NCAA transfer portal.

The news breaks just a few days after forward Gorjok Gak announced that he will also enter the transfer portal after he parted ways with the team in December.

Even though he is listed as a forward, Bassett typically played in the five spot for Florida.

Bassett had a hard time getting started at Florida, having to play behind center John Egbunu during his first season. He did see the court in 25 games in the 2017-18 season and started two.

His sophomore season he also saw limited playtime, playing behind center Kevarrius Hayes. He played in 35 games with one start, though he did see more minutes on the court with 396.

Junior year was supposed to be his time to shine but with the addition of graduate transfer Kerry Blackshear Jr., he was the second man in the lineup once again.

Coming into Florida, Bassett was labeled as a three-star prospect and was ranked as the 290 overall player in the nation.

Bassett’s junior season with the Gators was plagued with injuries. He sat out most of the season with a knee injury and a calf injury.

He also redshirted his freshman season after suffering a stress fracture early in the season.

With another departure, this leaves Florida with only freshmen to fill the five spot. The Gators will either have to find someone to fill the role or have their freshman step up big for the 2020-21 season.

Omar Payne started seven games out of his 30 games played for the Gators this season. He averaged 15.1 minutes, 3.8 points, 3.6 rebounds and 1.1 blocks.

Jason Jitoboh played in 22 games for Florida this season and started none. He averaged just six minutes, 1.7 points, 1.3 rebounds and 0.3 blocks.

Florida could also look to junior transfer Anthony Duruji. Duruji sat out this season due to NCAA transfer rules. During his time at Lousiana Tech, he played in 65 games, with 52 starts over two seasons. He averaged 9.7 points and 5.1 rebounds to go along with 85 blocked shots.