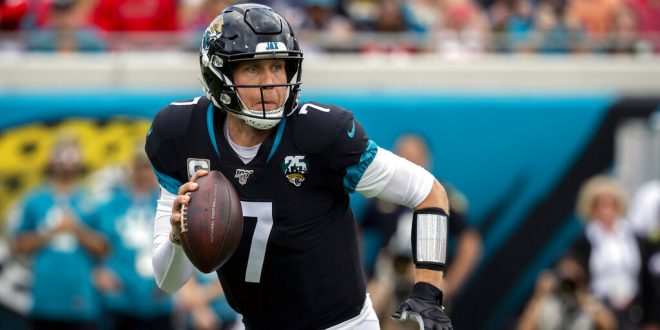 FILE - In this Dec. 1, 2019, file photo, Jacksonville Jaguars quarterback Nick Foles (7) scrambles out of the pocket during the first half of an NFL football game against the Tampa Bay Buccaneers, in Jacksonville, Fla. A person familiar with the trade says the Jacksonville Jaguars have agreed to send quarterback Nick Foles to the Chicago Bears for a compensatory fourth-round draft pick. The person spoke to The Associated Press on condition of anonymity because trades don't become official until the league year begins later Wednesday, March 18, 2020. (AP Photo/Stephen B. Morton, File)

The Jacksonville Jaguars traded veteran quarterback Nick Foles to the Chicago Bears for a compensatory fourth-round pick. The trademarks the quarterback’s fifth team and sixth stop in his eight years in the NFL.

Nick Foles has gone from Philly to St Louis to Kansas City back to Philly to Jacksonville and now to Chicago in the span of seven years. Won a little Super Bowl MVP in there.

With the trade, Jacksonville now has 12 picks in the upcoming NFL Draft, including two first-round picks at No. 9 and No. 20. The team also has three picks in the 4th round, two picks in each of the 5th and 6th rounds and one pick in each of the 2nd, 3rd and 7th rounds.

What the trade means for the Jags’ salary cap

The trade saved the Jags $3.125 million this year and cleared up $26.875 million from next year’s salary cap, per Michael DiRocco, ESPN NFL Nation Jaguars reporter.

DiRocco tweeted that the Jaguars’ quarterback mismanagement led to the organization absorbing $35.25 million in dead salary cap money in the last two years.

In case you're wondering: By the end of the 2020 season the Jaguars will have absorbed $35.25 million in dead salary cap money in the last two years for two QBs not to play for them. Blake Bortles was $16.5 million in 2019. Nick Foles is $18.75 million this season.

Some NFL analysts and journalists felt the contract to be too large for Foles, who is arguably a career backup. When the quarterback signed with Jacksonville last year, he was coming off a solid playoff performance with the Eagles after taking over for injured starter Carson Wentz in December.

Justin Barney, sports editor for News4Jax, believes the Jaguars failed to get enough production out of Foles, given the amount of money his contract is worth.

Jaguars got 3 TD passes from Nick Foles for roughly $45 million. Definitely sounds like a Jaguars type of deal.

Was it a good trade?

The best-case scenario for the #Bears is that they wasted a lot of money on Nick Foles. Because that will mean Mitch Trubisky emerged as the unquestioned starter. pic.twitter.com/ydnVbKe3va

Trevor Sikkema, a senior NFL draft analyst for The Draft Network, believed the Bears’ trade for Foles to be unreasonable contract management by both teams.

The 2018 Super Bowl MVP could not live up to expectations. Jacksonville lost all four of the matchups that Foles started.

After Foles suffered a broken collarbone injury against the Chiefs in Week 1, the Jags turned to rookie Gardner Minshew, a sixth-round draft pick out of Washington State, until Foles recovered.

The veteran returned to play three more games for the Jaguars, only to be benched after a poor showing against Tampa Bay.

In that game, the 31-year-old quarterback finished with a 1.2 QBR, according to ESPN. He also had three turnovers in the first three drives of the game.

The Jaguars looked to Minshew to finish out the season.

The Jags place trust in Minshew

With the trade, Minshew became the uncontested starting quarterback heading into the 2020 season. 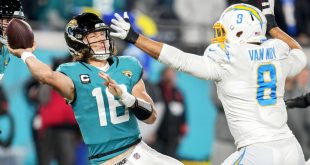 After an emotional comeback game against the Los Angeles Chargers, the Jacksonville Jaguars will visit …