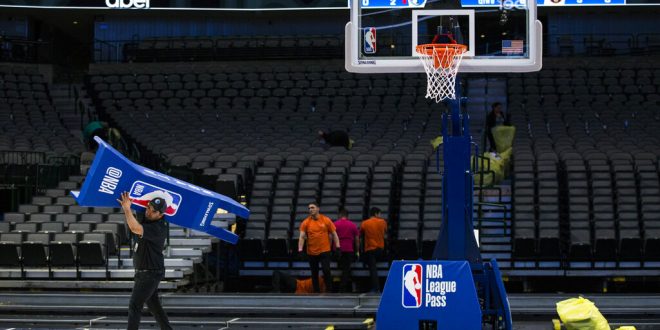 Just about a week ago, the NBA suspended play after two Utah Jazz players tested positive for the Coronavirus. Rudy Gilbert was the first to report a positive test, but since, several other players, including Kevin Durant, have contracted the virus.

Last Wednesday, the Utah Jazz announced they would be postponing that evening’s tip-off due to a player’s diagnosis. Fans were stunned, and some were already seated in Chesapeake Energy Arena. However, no basketball fan could have anticipated what transpired next. The league announced later that evening that the regular season is on hold.

The hiatus that unfolded set a precedent for the days to come. Typically, the only time in American history where leagues have been stopped was during a time of war or labor issues. Many organizations began by simply canceling games for the week, but soon made more long-lasting changes. Once basketball was halted, it did not take long for other sports to follow suit. MLB, PGA and NCAA events have been either canceled or postponed. The Kentucky Derby is the latest to take the hit.

What are the players doing?

Many players are taking this break to practice social distancing. Others are trying to maintain momentum and training from home. Golden State Warrior Steph Curry, along with the rest of the Warrior organization, donated $1 million to help part-time employees during this time of uncertainty.

Additionally, NBA facilities and practices are also shutting-down. The goal of doing this is to eliminate the spread of the virus from players to coaches. Hopefully, the NBA can play a part in ending the pandemic by keeping all members of the team away from stadiums.

But… you can still watch sports

There is some good news for basketball fans. During this break for hoops, the NBA released a Free League Pass for fans to view games from this season as well as archived ones. The pass is good through April 22.

The NFL also capitalized on this opportunity. They have offered a Free Game Pass for fans. For those who may not watch basketball, you can watch your favorite team score a touchdown through May 31.