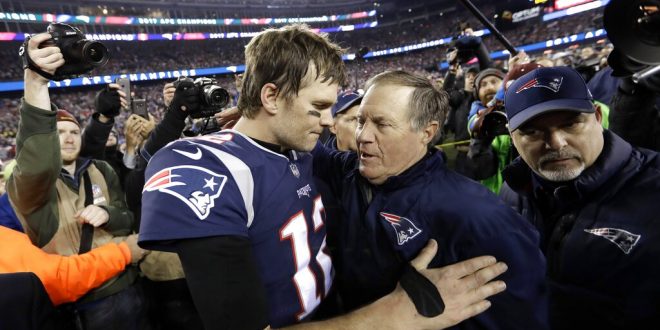 The Brady-Belichick era is over. The undoubted greatest dynasty in professional football that included six Super Bowls, 17 division titles and three MVP’s for Brady is now at its end.

Brady to the Bucs

Brady’s contract with Tampa Bay is around $30 million a year and this signing alone transcends the Buccaneers into Super Bowl contenders. There odds to take home the Lombardi Trophy jumped from 66-1 after this year’s game to 12-1 after the Brady signing.

The sight of Brady in another uniform is just something we thought we’d never see. Amid all of the craziness with sports (well actually lack thereof), throw Brady not in a Patriots uniform at the top of the list.

Tom Brady is expected to land with the Buccaneers barring any unforeseen circumstances, per @AdamSchefter and @JeffDarlington. pic.twitter.com/N5JnWObhY7

It’s no doubt the future Hall of Famer will have plenty of weapons at his disposal. With Mike Evans, Chris Godwin and O.J. Howard, that’s more to work with than he had in New England the last few seasons.

Why did Brady leave?

This is the million-dollar question. It doesn’t seem like money was an issue, Brady posted on his social media a couple days ago he wasn’t returning. Was the relationship between ownership tarnished? Don’t think so – Patriots’ owner Robert Kraft said Brady was “like a son” to him? That just leaves player and coach, right? Belichick’s silence means we’ll never get an answer from him.

Tom Brady was the Derek Jeter or Kobe Bryant of the New England Patriots. He was a lifer. To throw that all away to play for the Tampa Bay Buccaneers just doesn’t seem real. He doesn’t owe anybody anything but honestly what the hell is the thought process there.

One thing for sure, according to Brady’s social media, it’s all love from him and he is “forever a patriot.”

It’s obviously difficult to know exactly what Brady is thinking unless he comes out and says it himself. Many close to the Patriots organization, like beat reporter Jim McBride, believe the quarterback was ready to move on.

Bruce Arians has already begun to build something special in Tampa Bay. The Buccaneers finished 7-9 last season, six of those losses were by one possession. No need to get into detail about Brady’s success rate in the clutch. But for argument’s sake, Brady is second all-time in fourth quarter comebacks, has the highest playoff win percentage at 76% and holds the most completions in Super Bowls with 100.

In addition to Brady, the Bucs re-signed Jason Pierre-Paul and assigned the franchise tag to Shaquil Barrett who recorded a career-high 19.5 sacks. In addition, Tampa Bay holds the 14th overall pick in next April’s draft giving them an opportunity to still select a high-impact player.

Even with the Brady signing, the playoffs are no guarantee. The NFC South features the always dangerous New Orleans Saints, a revamped Carolina Panthers organization and an Atlanta Falcons team that played much better towards the end of the season.

In a time where sports are scarce, a wild turn of events like this is that much crazier. With the NFL Draft still expected to take place April 23, make sure to stay tuned on all the latest league news and buzz.

This is the first time in 20 years the AFC East is this wide-open especially with the Buffalo Bills and Miami Dolphins making a multitude of moves during free agency.

Also, it will be interesting to see how the tale of Jameis Winston ends. Where will the former number one overall pick land? Will it be a starting job and if so how much?