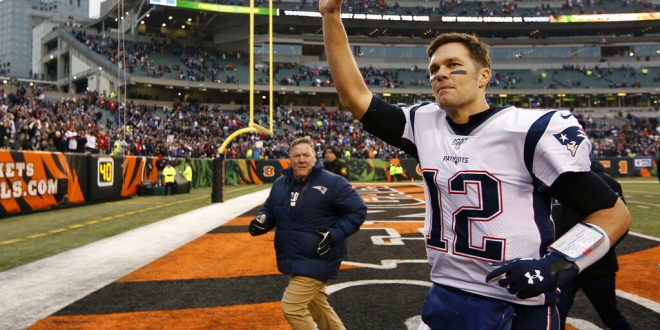 FILE - In this Dec. 15, 2019, file photo, New England Patriots quarterback Tom Brady (12) waves to the crowd after an NFL football game against the Cincinnati Bengals in Cincinnati. Tom Brady is an NFL free agent for the first time in his career. The 42-year-old quarterback with six Super Bowl rings said Tuesday morning, March 17, 2020, that he is leaving the New England Patriots. (AP Photo/Frank Victores, File)

Pats now have uncertainty at Quarterback

And for the Patriots, unknown at quarterback hasn’t been a term describing their quarterback room since Drew Bledsoe’s injury in 2001. Early in the 2001 season, New England played against in-division rival the New York Jets. Bledsoe took off and scrambled to his right and picked up a few yards. Then, this happened.

Upon heading out of bounds, Jets linebacker Mo Lewis hit Bledsoe so hard, it gave him a sheared blood vessel in his chest. While concerns off the field were placed on Bledsoe’s overall health and safety, concerns on the field for New England turned to second-year man out of Michigan, Tom Brady.

Since that day, Brady has brought the Patriots six Super Bowl victories. Almost 20 years later, he has finally said goodbye to New England. Brady is expected to sign with the Tampa Bay Buccaneers very soon and that leaves Jarrett Stidham behind center for the Pats. New England likes Stidham, but like Brady on that day in 2001, he is mostly a mystery as of now.

The Possibility of Stidham

If any coach would put his faith in a quarterback as low-profile as Jarrett Stidham, it would be Bill Belichick.

Under his tenure, New England has had a history of playing undr-the-radar guys and transforming them into standouts. If Stidham were to become a household name, he wouldn’t be the first. Not just with the quarterback position, but with his entire team, Belichick has a history of this.

Guys like Wes Welker, Chris Hogan, Dion Lewis, James White and many, many more were never considered NFL greats. Yet, in New England, they came together and won championships.

Even so, Stidham has barely played any football at all in the NFL. In 2019, he only threw four passes in total, completing two and throwing and interception. However, in his two years at Auburn before that, he did throw 36 touchdowns to just 12 interceptions. Similar to Brady in New England, Stidhman was always a steady hand for the Tigers.

Of course, there is plenty of time before September for the Patriots to make moves for another QB. The upcoming NFL Draft in April has a multitude of guys, and the free agent pool hasn’t entirely dried up yet, although it is shrinking.

With Jaguars quarterback Nick Foles getting dealed to the Chicago Bears on Wednesday, and Chargers QB Phillip Rivers headed to the Indianapolis Colts, the veteran market has shrunk dramatically. Bengals quarterback Andy Dalton is one of the only guys left thought to be available with legitimate experience in the NFL.

Now, New England now will almost assuredly have to go with someone lacking major NFL experience. Whether that be Stidham, a rookie or another low-profile free agent remains unknown. The only certainty now is that there’s uncertainty, something the Pats haven’t said about their QB room in nearly two decades.

Previous Did Brady have falling out with Patriots?
Next Commissioner Silver Discusses COVID, Future of the NBA