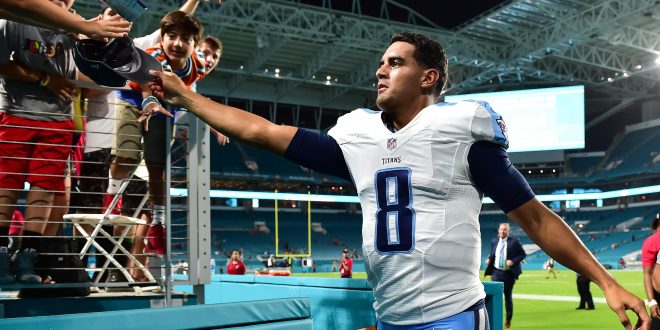 Former Tennessee Titans quarterback Marcus Mariota signed a deal with the Las Vegas Raiders this week. The details of his contract still haven’t been released.

What will Mariota be in Las Vegas?

Over the years, Mariota has proven to be a capable starter. He led the Titans to a playoff win in 2017 over the Kansas City Chiefs. However, Mariota has an injury-prone past. He has never started a full 16-game schedule as he heads into the 6th year of his career.

ESPN NFL Front Office Insider Mike Tannenbaum spoke about how he thinks Mariota will fit in with the Raiders.

Marcus Mariota has had some great moments in his career. However, he and Titans struggled in the first six weeks of the season last year, going 2-4. Then, Ryan Tannehill stepping in during the Denver Broncos game in week 6, and Mariota never got his starting job back as the Titans went to the AFC Championship game.

Even before this move, the Las Vegas Raiders were a team everyone had their eyes on. Mostly because of the move from Oakland to Las Vegas. Also, the Raiders’ new stadium looks like it will be one of the best in the league.

Now, with Mariota on the team, many are wondering who the starter will be this season. Even if Derek Carr remains the starter, the Raiders will have a solid backup quarterback behind him.