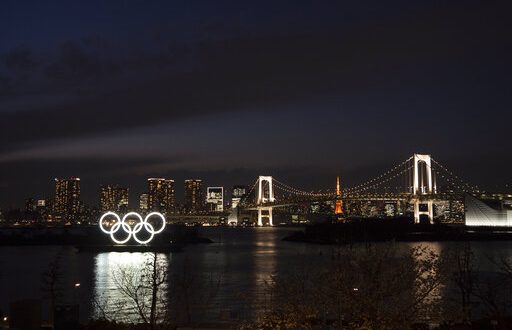 The Olympic rings float in the water near the Rainbow Bridge in the Odaiba section of Tokyo, Monday, March 23, 2020. The Tokyo Olympics are going to happen — but almost surely in 2021 rather than in four months as planned. (AP Photo/Jae C. Hong)

The International Olympic Committee (IOC) set a four-week deadline to decide whether or not the Tokyo 2020 games should be postponed. The IOC’s executive board met on Sunday to decide this.

A few days ago, the Olympic Committee was still completely on board with continuing with the games.

This meeting occurred after different athletes and national Olympic Committees were pressuring the IOC t to postpone the games. The 2020 Tokyo Olympics is one of the few remaining, if not the only, athletic events that have not been postponed.

As of now, they are still scheduled to take place from July 24 until August 9.

Canada is the first country that decided to not send its athletes to the games this summer. A statement by the Canadian Olympic Committee read:

According to the IOC, cancellation is still not on the agenda. But a “scaled-down” version of the games could be in consideration.

Despite the Committee’s statements, the most likely outcome is the postponement of the games by several months or even a year.

Another association weighting in IOC’s decision is the British Olympic Association (BOA). In their statement, they respected the time it takes to make a decision like this, but encourage the IOC to make one as soon as possible.

We welcome the IOC executive board decision to review the options in respect of a postponement of the Tokyo 2020 Olympic Games”. said BOA chairman. “However, we urge rapid decision-making for the sake of athletes who still face significant uncertainty”

A committee that is on board with IOC’s decision is the International Paralympic Committee. They stated that they “fully support” the board’s decision.

After four weeks, the IOC will meet again and revisit the possible options. They have shown in the past that they are strongly on board with not rescheduling. But with more COVID-19 cases spreading around the world, a different route might be approached.

The IOC is in danger of more countries backing out if they do not reschedule the games.

Camila is a senior at the University of Florida, who served as a beat writer for the women's basketball team from 2019 until the 2021 season. She was also a beat writer for the Gators football team during the 2020 season. Camila is also WUFT's news director as well as a sports reporter/anchor.
@CamilaMaffuz
Previous New England Signs Quarterback Brian Hoyer to One-Year Deal
Next Philip Rivers Wanted the Colts All Along