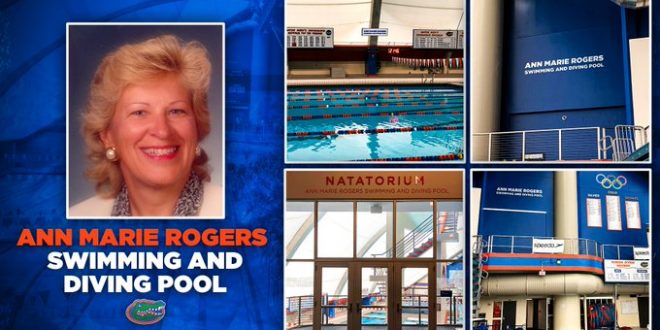 The University of Florida Board of Trustees decided Thursday to name the swimming and diving pool at Stephen O’Connell Center as the Ann Marie Rogers Swimming and Diving Pool.

The decision came after Florida alumna Veronica Meinhard and her wife Kristina M. Johnson donated $1 million to the UAA.

The Gators put out a press release announcing the decision on Thursday.

Rogers served as Florida’s Associate Athletics Director from 1985-2003. During her tenure, Florida finished among the top-10 women’s athletic programs in the nation each season, winning seven national titles.

Not only that, but she also made several key hires, including the addition of Mary Wise as the head coach of the women’s volleyball team. Since then, Wise has coached the team for over two decades and is among the winningest coaches in the sport.

Meinhard enrolled at the University of Florida in the fall of 1988 and eventually joined the women’s swimming team. As a student, she worked with Gator Boosters and would eventually become director of major gifts later in her life.

“As we were thinking about an opportunity to give back to our respective alma maters, obviously mine being Florida, we were not interested in naming things for ourselves but rather using the opportunity to honor individuals who made an impact on our lives,” Meinhard said. “We both understand the importance of Ann Marie’s work and what it afforded women.”

After her retirement in 2003, Rogers remained in Gainesville with her husband Bruce. She never expected an honor like this, even after all of her years with the Gators.

“I’ve been retired for quite a long time and I never expected something like this,” Rogers said.

Prior to Florida, Rogers worked under Bear Bryant at the University of Alabama. During her time there, she became the first director of eight women’s sports teams.

The Ann Marie Rogers Swimming and Diving Pool will remind all of the important work she did. A dedication ceremony to celebrate the naming will be held this fall.

I'm a third-year student at the University of Florida passionate about storytelling and sportswriting. My goal is to work in communications for a professional sports team after I graduate.
Previous Notre Dame Football Trying To Figure Things Out
Next Magic Johnson Reacts to Virus