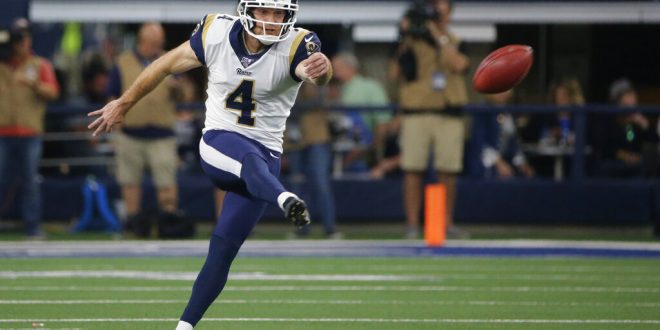 FILE - In this Dec. 15, 2019, file photo, Los Angeles Rams kicker Greg Zuerlein (4) kicks during an NFL football game against the Dallas Cowboys in Arlington, Texas. A person with knowledge of the deal says the Dallas Cowboys and kicker Greg Zuerlein have agreed on a $7.5 million, three-year contract. The Cowboys are set for a kicking competition because they also re-signed Kai Forbath after he made all 10 field goals last season as the replacement for a shaky Brett Maher. (AP Photo/Michael Ainsworth, File)

The sixth round pick, known as Greg The Leg, spent his first eight seasons with the St Louis now Los Angeles Rams.

He will reunite with his former special teams coach John Fassel, who joined the Cowboys coaching staff this season.

The kicker has shown great leg, but is coming off a career low in his 2019 campaign only connecting on 72 percent of his kicks, 22 of 33, but made all 42 extra point attempts.

Zuerlein has made multiple deep kicks for the Rams in his tenure. The most memorable one came in the 2019 NFC Championship Game, kicking a 57-yard game-winner to send the Rams to the Super Bowl.

The LA Rams are heading to the Super Bowl!

He is eight for 10 on field goals in the playoffs.

Brett Maher was the primary kicker for the Cowboys in 2019. He made all his extra point tries but went 20-for-30 in field goals, which was the most missed kicks in the league in 2019.

ESPN NFL Nation reporter Todd Archer, who covers the Dallas Cowboys, said the Cowboys are hoping to being stability to the position.

Mike Vanderjagt, who Archer mentioned, signed a three-year, $4.5 million deal in 2006 and only made it through 11 before getting replaced by Martin Grammatica.

Vanderjagt made 13-of-18 attempts and was only two of five on attempts 35-plus yards and never got another contract in the NFL.

Forbath helped the Cowboys’ down the stretch kicking a perfect 10-for-10 on field goals and 20-for-20 extra points.

Zuerlein’s contract and his relationship with Fassel looks to give him the edge in the completion.