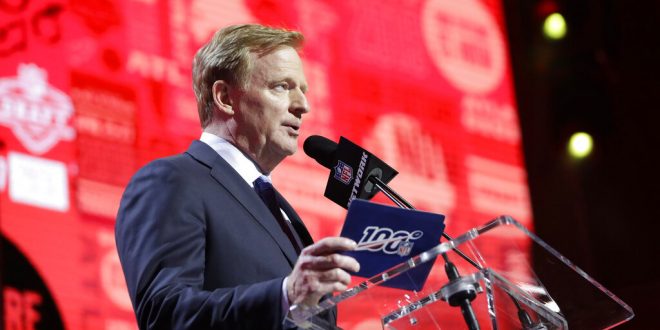 NFL Commissioner Roger Goodell announces Washington's Kaleb McGary has been selected by the Atlanta Falcons in the first round at the NFL football draft, Thursday, April 25, 2019, in Nashville, Tenn. (AP Photo/Mark Humphrey)

With spotlights on him at every angle, Roger Goodell steps onto the stage. He makes the short walk to the podium as the crowd buzzes with energy. After welcoming the audience, he’ll announce who the first team has selected– this year, the Cincinnati Bengals pick first. He glances at the card in his hand and begins to read. “With the first pick in the 2020 NFL Draft, the Cincinnati Bengals select…” Energy that turned to silent anticipation becomes an eruption as members of a fan base welcome a new team member. It’s an annual tradition, as big a part of football season as the Super Bowl and its halftime show.

That tradition won’t happen the same way this year.

As a result of COVID-19, the raging respiratory virus that has infected 145, 179 Americans, draft night is going to look a little different. Rather than be held in an auditorium with a large crowd, it could happen remotely, with Goodell announcing picks through a camera. Sources with knowledge of the event’s planning describe such a setup as the “worst case scenario”.

ESPN’s Jeremy Fowler says its still being determiend how a remote draft will work for teams.

Teams are hoping to have a few essential personnel together, such as the owner, head coach, and GM. However, even that may not be possible– teams may be forced to communicate exclusively over technology.

While reports say he would announce picks via a camera, his location has not been decided. However, regardless of where his announcements are from, he will remain heavily involved, says Fowler.

The possibility of a remote NFL Draft is one of many ways COVID-19 has affected sports. Both the MLB and NBA postponed their seasons indefinitely, and the 2020 Olympic Games have now been postponed to 2021.