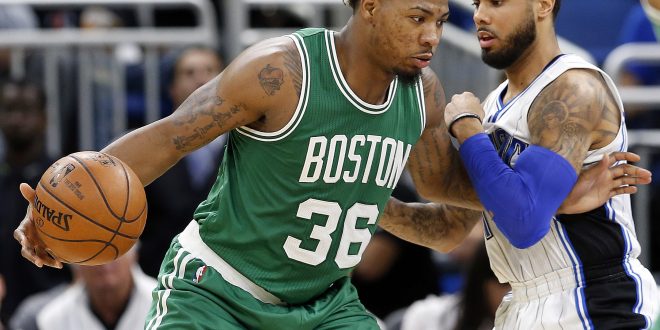 In a sports world without much good news lately, the Boston Celtics got some on Sunday night when guard Marcus Smart announced he has been cleared of COVID-19.

Smart is just one of the 140,904 people (as of Sunday at 4 p.m.) to get the virus, but according to head coach Brad Stevens, Smart didn’t let the virus get to him emotionally.

Smart was averaging 13.5 points per game through 32.5 minutes of action a game — a career-high. But there is currently no word on when, or even if, the season will resume for players like Smart to build on his performance.

The season was suspended on March 11, and for it to restart again, Stevens said there are still a couple of factors that need to play out for the NBA.

Since the NBA season’s suspension, stadiums and practice facilities have also been closed. However, Commissioner Adam Silver said there is discussion about what the season could look like if it was restarted. According to Stevens, it’s forward-thinking like this that makes Silver such a great leader.

In the meantime, Stevens joins the scores of players who are urging fans to stay safe and healthy.

Stevens also sent out a message via the Celtics’ Twitter account Monday morning in which he thanked the medical workers who are helping to combat the virus.

Thank you to all the doctors and medical professionals, and a special shoutout to our doctors at @NEBHortho, for your tireless work keeping every one safe and healthy #NationalDoctorsDay pic.twitter.com/uwmAOHNK5W

During this period of no sports, the Celtics’ Twitter account has been especially active. From tweeting trivia questions to tweeting out photos and statistics, the social interaction is just one way that teams have tried to keep their fans entertained.

In fact, the Celtics even pretended to live-tweet a game between the Celtics and the Chicago Bulls. The catch? The game was from 1986.

As expected, fans loved it. While it isn’t real basketball, the Celtics are doing everything they can to make sure that their fans and players are kept informed yet entertained in this strange time.