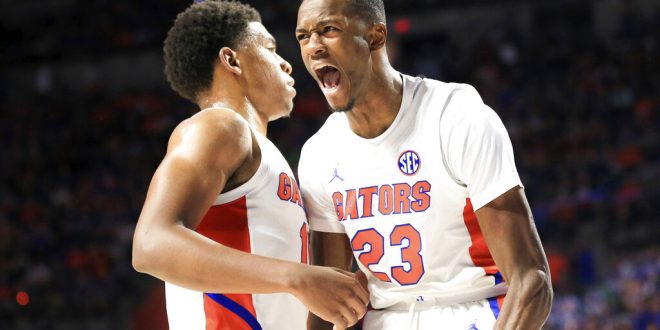 Freshman guard Scottie Lewis announces Monday morning he will stay with the Gators for his sophomore season. The McDonald’s All-American was projected to be a one-and-done deal with Florida, but says there is “unfinished business” to attend to.

The 6’5″ New Jersey freshman averaged 8.5 points per game, averaging near 30 minutes a game. Due to this, Lewis was shooting 44% from the field. Lewis led the team with 36 blocks, and was second in steals with 36. Undoubtedly, Lewis was one of the top defenders in the Southeastern Conference as a freshman. Lewis was also in the All-Freshman team for the 2019-2020 season. Florida’s season came to an end early after the NCAA canceled all spring sports due to the coronavirus. Not only did the conference tournaments end all around the nation, but the NCAA tournament was cancelled as well. Therefore, Lewis and his Florida team had to end their season early right before their SEC Tournament matchup against Georgia.

Some of Lewis’ teammates will have to make their own decisions in the coming weeks.

Andrew Nembhard: The Canadian declared for the NBA Draft in 2019, but later on turned back to forgo his Sophomore season with Florida. Nembhard averaged 11.2 points and 5.6 assists a game. He also had five games during the season with over 20 points. He is most known for his game winner against LSU during the 2019 SEC tournament.

Keyontae Johnson: Johnson was put in the All-SEC First team this season. He was the leading scorer with 14 points a game, and leader in steals with 1.2. The Sophomore was shooting nearly 55% from the field, and pushed his team later on in the season to succeed.

Noah Locke: The three-point mastermind has done well on the offensive end of the table. Locke set the freshman record with 81 threes in a season. Also, he set a school record of 15 consecutive games with multiple three-pointers. He averaged 10 points a game and improved his three-point percentage by 5%.