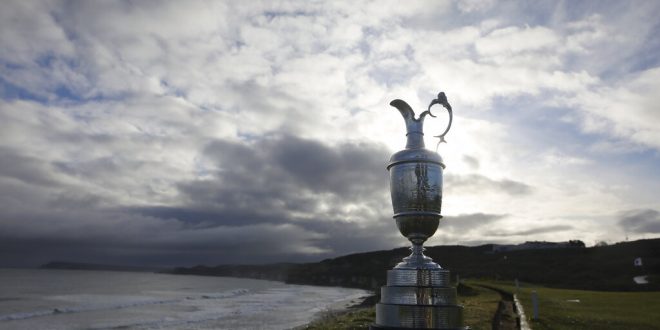 FILE - In this Tuesday April 2, 2019 file photo the Claret Jug is placed on display to the media at Royal Portrush, Dunluce course, Northern Ireland. The organizers of the British Open announced Monday April 6, 2020, that they have decided to cancel the event in 2020 due to the current Covid-19 pandemic and that the Championship will next be played at Royal St George's in 2021. (AP Photo/Peter Morrison, File)

Golf’s oldest major tournament will not have a 2020 rendition.

The 149th British Open was canceled Monday by the R&A, the organization that conducts the competition, due to the coronavirus pandemic. It was scheduled to begin July 16.

Spectators will have to wait until July 15, 2021, the official rescheduled date, to see action at Royal St. George’s. The course in southeast England, which was going to host the upcoming tournament, will instead host next year.

This is the first time the British Open has been canceled since 1945, due to the second World War.

It is with a heavy heart that we have to cancel The Open for the first time since WWII. We appreciate that this will be disappointing for a great many people but we have to act responsibly during this pandemic and it is the right thing to do.
Statement: https://t.co/brJfuOZSFP pic.twitter.com/iizOupOk4m

In its statement, the R&A said it will transfer tickets purchased for this year’s tournament to 2021. Those who cannot attend next year will get a full refund.

As of early March, world No. 1 Rory McIlroy was the betting favorite to win the British Open, followed by Brooks Koepka and Dustin Johnson.

“Our absolute priority is to protect the health and safety of the fans, players, officials, volunteers and staff involved in The Open,” said chief executive of the R&A Martin Slumbers. “We care deeply about this historic Championship and have made this decision with a heavy heart.

The Open announcement comes amidst a flurry of COVID-19 related schedule changes in the golf world.

The Masters, which was supposed to start later this week, was recently postponed until November 12-15. Additionally, the PGA Championship was moved to August and the Ryder Cup delayed until September.

Female golfers must adjust their calendars, as well. The U.S. Women’s Open in Houston, scheduled for June 4-7, was pushed back last week to mid-December.

"Our priority remains ensuring the safety of all involved with the U.S. Women’s Open, while still providing the world’s best players the opportunity to compete this year.” – @USGA CEO Mike Davis

With many of golf‘s major tournaments being postponed until the fall, it will be interesting to see how this affects other sports.

Here's the joint email just sent on behalf of the PGA Tour, European Tour, R&A, PGA of America and the Masters. Summary on bottom of second page… pic.twitter.com/3gxF96yqJA

The NFL season is scheduled to begin on Sept. 10, but this could change in the coming weeks. The already-delayed MLB regular season has reported hopes to begin in July, and the NHL and NBA seasons are still suspended with no announced return date.

I'm a senior journalism student at Florida. I love sports, and I love covering sports. I'm one of the beat writers for the Gator soccer team right now, and if you follow me on Twitter @johnmiceli13 you'll never miss a soccer update
Previous Duncan and Garnett inducted to Hall of Fame
Next Gators’ Lewis stays for Sophomore Season