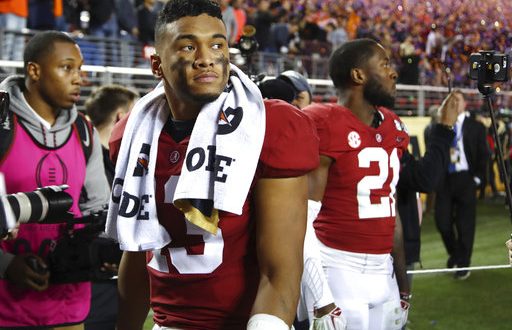 Tua Tagovailoa’s draft position is a big debate heading into the NFL Draft on April 23. Who will take him? Will he slip later in the round? These are common topics when discussing highly productive players with checkered medical histories.

He reportedly sent all 32 teams a “virtual Pro Day” workout to replace his lost combine and Alabama Pro Day. He wants teams to know he’s 100 percent and ready to go.

With rumors swirling about his health and NFL teams unable to see him work out for themselves, Tagovailoa held a virtual pro day at an undisclosed location in Nashville on Thursday afternoon.https://t.co/u3kXOiMD3K

So let’s dive into what exactly resulted in this polarization of one of college football’s most dynamic players.

When healthy Tua Tagovailoa shows why he’s a potential top-five pick in the coming draft. In just 25 games as a starter, Tagovailoa threw for almost 7,000 yards and 76 touchdowns to just nine interceptions. That’s an 8:1 ratio.

In his 2018 campaign, fans saw Tua put up over 3,900 passing yards and 48 total touchdowns to six picks. He finished second in Heisman voting but took home the Walter Camp and Maxwell Awards.

His 199.4 career passer rating is the highest in college football history.

Here are some of the strengths scouts see in Tagovailoa:

ESPN’s Dan Orvlosky said fans saw Tagovailoa play hurt in multiple big games like 2018’s SEC and national title games plus in 2019 against LSU. He put up over 400 yards against LSU in that matchup.

“Durability matters, of course, but so does toughness and so does grit,” Orlovsky said. “And the good thing with Tua (is) he has displayed that.”

Tua Tagovailoa's agent, @leighsteinberg, says on @790TheTicket "health concerns are overblown" & his 2 doctors have been "clear that Tua's health is fine. There's no recurrence that's going to happen here."

Steinberg says Tua will be a "very high pick."

Well, it’s more like one reason: his health. It is something well-documented throughout his college career.

Then his college career effectively ended after a hip dislocation and posterior wall fracture against Mississippi State. Guess what he did to fix that? Surgery.

According to former NFL GM Michael Lombardi, Tagovailoa has allegedly failed physicals for two different teams with top 10 picks. But, of course, rumors and conjecture tend to kick up in the weeks leading up to the draft.

However, Alabama Head Coach Nick Saban encouraged Tagovailoa to continue with his workouts and rehab. Saban made sure the QB’s medical recheck took place with his same doctors from Alabama.

Although, players like Rob Gronkowski and Da’Quan Bowers saw their draft positions affected due to concerns over their durability.

Everyone will find out what teams think of Tua come April 23.