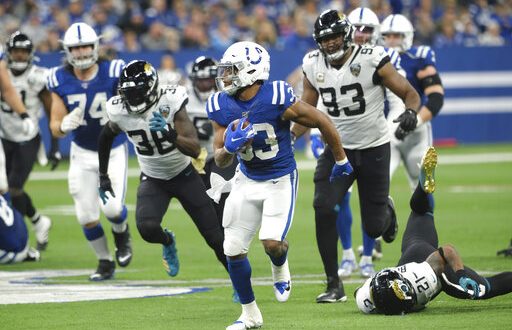 Indianapolis Colts' Jonathan Williams (33) runs during the second half of an NFL football game against the Jacksonville Jaguars, Sunday, Nov. 17, 2019, in Indianapolis. (AP Photo/AJ Mast)

Linebacker Darius Leonard thinks that the Indianapolis Colts have a shot at winning big.

With all the offseason trades that the Colts have made, it isn’t a surprise that they’ll show improvement.

Starting with the QB position, the Colts have upgraded after signing Philip Rivers. Rivers spent the first 16 years of his career with the Los Angeles Chargers but wanted a change of scenery. The QB will now team up with Colt’s offensive coordinator, Frank Reich, and quarterbacks coach, Nick Sirianni, whom were on staff with Rivers in LA from 2013-2015.

Rivers recorded one of his best seasons as a pro, throwing 4,478 yards, 32 touchdowns and lead the NFL in completion percentage during the 2o13 season when the three were together.

Leonard spoke about his confidence with Rivers coming onto the team.

Indianapolis runs its defense on a 3-4 technique. The newest addition of DeForest Buckner allows for a more powerful defensive unit. In addition, Buckner was arguably one of the best players during the San Francisco 49ers 2019 Super Bowl run. Having him as part of the defense will really help out.

With a potential top-five defense and upgraded offense, the Colts seem to have a pretty good chance at the Super Bowl.

Leonard has been on the Colts for his three-year professional career. He was selected in the second round (36th overall) of the 2018 NFL draft and has played in a total of 28 games. The DB is a special part of the defense, making impactful plays when the team needs them most.

Leonard earned All-Pro honors in his 2018 rookie season and led the league in tackles with 163. He said that he is fueled by all the criticism.

The Colts finished the 2019 season going 7-9 and third in the AFC South.

The upgraded offseason could lead the Colts to a successful campaign beyond just the AFC.

Sasha Stein is a current UF student aspiring to become a sports reporter/broadcaster.
Previous The Careers of Seniors in Spring Sports at Wisconsin Are Over
Next Will COVID-19 Put a Halt to the 2020 College Football Season?