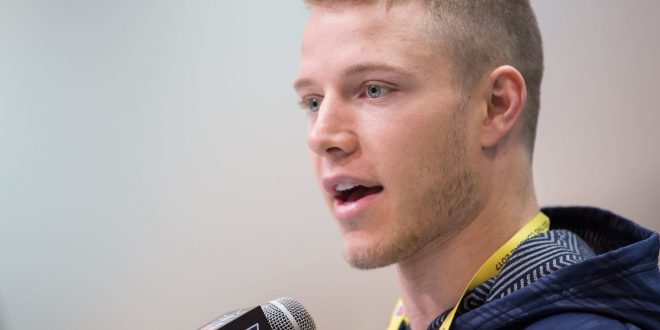 With a new head coach, new coordinators and a new quarterback, the Carolina Panthers have undergone a mass overhaul in the 2020 offseason. But while their leadership, schemes and playbooks change, one thing will remain constant once football returns – Christian McCaffrey.

The All-Pro running back agreed to a four-year extension Monday worth about $64 million. With one year and a team option remaining on McCaffrey’s entry-level contract, he will earn roughly $75 million through 2025.

Christian McCaffrey: “I’m so excited to continue my career in Carolina. I want to thank Mr. Tepper, Marty Hurney, and Coach Rhule for the opportunity to help lead this great franchise, and to all my teammates for their help along the way. And to Panthers fans, KEEP POUNDING!”

The new deal is the richest running back contract in NFL history, as McCaffrey will earn an average of $16 million per year.

The agreement comes despite the recent devaluation of the running back position by NFL experts and front offices.

Todd Gurley first set the mark in 2018 when he signed a historic four-year, $60 million deal with the Rams. The contract netted Gurley about $15 million a year and it seemed to be just about right for the 2017 Offensive Player of the Year.

Fast forward to 2020, and the Rams cut Gurley after deeming that his cap hit was not worth the back’s ongoing injury concerns after he accumulated 857 rushing yards, 207 receiving yards and 14 total touchdowns in 2019.

Meanwhile, Elliott’s deal remains under the microscope and skepticism looms.

That seems like a lot. But when you consider that he rushed for 95.6 yards per game the previous year with just three more carries, the criticism makes more sense. Especially since Elliot rushed for 98.3 yards per game on 59 fewer carries in 2017.

The NFL’s former highest-paid running back also saw a decrease in receiving production. He saw 24 fewer targets and amassed 147 fewer yards from 2018 to 2019.

With McCaffrey’s new contract, the Carolina Panthers certainly hope that he can buck the current trend of overpaid running backs.

When looking at McCaffrey’s past stats and analytics, one thing can be determined: McCaffrey’s historic production warrants a historic contract.

McCaffrey’s league-leading 2,392 yards from scrimmage in 2019 ranks only behind Marshall Faulk and Chris Johnson all-time for single-season production.

As gaudy as that stat is, it still doesn’t properly illustrate McCaffrey’s pass-catching ability. And it definitely doesn’t reflect his importance to the Panthers’ offense.

So how about this? He also became just the third player in NFL history to amass at least 1,000 rushing yards and 1,000 receiving yards in a single season.

What are your thoughts on the signing, Panthers fans?

That says quite a bit. He ranks with Hall of Famer Marshall Faulk and 49er great Roger Craig as the only players to reach that milestone. But it still doesn’t capture how integral he is to Carolina’s offense.

That’s great news for McCaffrey, as his multi-dimensional skillset could evoke greater results than he has already produced.

In fact, it’s not inconceivable to see McCaffrey featured as the building block for the entire offense.

Brady became widely known as an offensive guru after installing a brand new system in one season at LSU, after years of stagnant offensive schemes and playcalling.

While Brady won’t have Joe Burrow running his playbook in Carolina, he will have a player who he’s familiar with under center.

Brady spent two seasons as an offensive assistant in New Orleans in 2017 and 2018.

Newly acquired Carolina quarterback Teddy Bridgewater signed with the Saints before the 2018 season.

The familiarity between the two likely contributed to Bridgewater’s signing, as Brady helped incorporate a Saints-like scheme at LSU. The Tigers’ 2019 offense featured a West Coast offense archetype, similar to the offense Sean Payton runs in New Orleans. Brady’s addition of Run-Pass-Option plays further diversified the playbook and revolutionized LSU’s brand of football.

The running back, who is likely an early-round pick in the upcoming draft, was nearly impossible to account for. When game-planning, defensive coordinators had to prepare for his abilities as a traditional running back. But what caused several headaches for defenses across the country was his ability as a receiver.

He amassed 1,414 rushing yards and rushed for 16 touchdowns.

That production is impressive by itself.

Now add his 55 receptions and 453 receiving yards. Now you have a multi-dimensional threat capable of torturing defenses on the ground and through the air.

That is how we can expect Brady to use Christian McCaffrey.

As the Panthers’ primary playmaker, you can expect Brady will implement several plays and strategies to get McCaffrey the ball in open space.

As Edwards-Helaire said at the NFL Draft Combine, “The athletes they have, it’s going to be pretty fun watching them.”