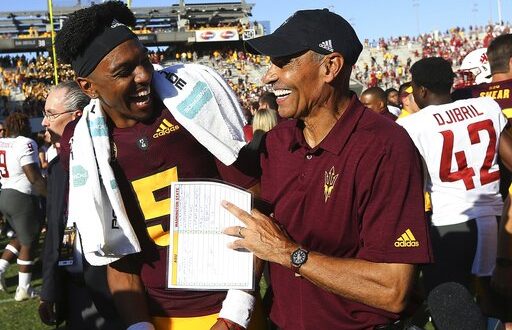 ASU’s Herm Edwards adjusting to life with no spring football

Herm Edwards, like many others, is adjusting to life without football practice. Most college coaches would be playing their spring games, instead, they are trying to figure out how to go about workouts and coach meetings.

The Sun Devils approach the new season with two previous winning seasons. Edwards and his team are eager to get the ball rolling and start playing again. Despite the winning record, the ASU head coach is eager for football to come back.

“We got seven practices in. As far as the team goes, very young. We only have nine seniors on this team, but we planned it that way. This is going on our third season. This is basically our second recruiting class.” – ASU’s Herm Edwards

Two consecutive winning seasons puts the Sun Devils is a good position for the upcoming season. The 65-year-old coach is hopeful, but knows the team needs to improve before the first kickoff of the season.

What the Sun Devils are doing

Like other teams, Arizona’s sports are on hold. Coaches are not in the stadium. Players have returned home. Maintaining a healthy and physically fit team is everyone college coaches priority. The New Jersey native has been working with his coaches and with coaches all around the country to make the best of their current situation.

Zoom meetings with other college coaches isn’t the only thing Edwards is doing. He holds meeting s with his players and aids them in setting up workout regiments and a plan to stay in shape.

His thoughts on the NFL Draft

The 2020 NFL draft is approaching. It will be unlike any other in history. Players will be selected virtually. Coaches, players and fans await the draft every year and many speculate whether a virtual draft is a game-changer for the sport. However, the former NFL coach thinks that it hardly changes anything.

With things changing everyday, no one can say for certain what the 2020 football season will look like. Whether its professional or collegiate, coaches and athletes are doing what they can now to prepare for fall football.