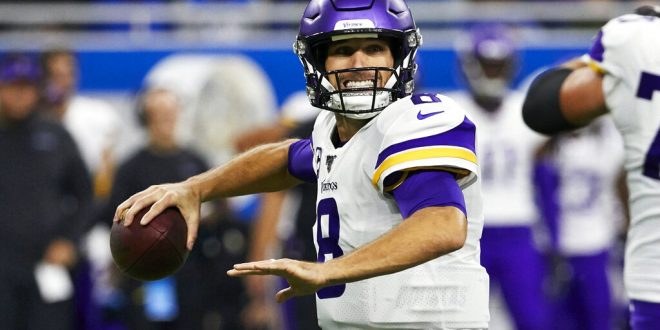 FILE - In this Sunday, Oct. 20, 2019, file photo, Minnesota Vikings quarterback Kirk Cousins (8) passes against the Detroit Lions during an NFL football game in Detroit. Cousins prepares to face his former team, and Case Keenum and Adrian Peterson get ready to do the same, as the Minnesota Vikings try to keep their momentum going against the woeful Washington Redskins. (AP Photo/Rick Osentoski, File)

To accomplish anything as a group, there has to be buy-in.

There has to be a willingness to move forward with decisions made by leaders. Otherwise, it is a flop.

With sports canceled as of now due to concerns of COVID-19, commissioners and owners of professional sports leagues getting creative. They are thinking of ways to resume play without endangering anyone’s health. Most of the ideas include playing without fans and quarantining entire leagues in one city.

The NFL is still a few months away from making any decisions about its season. However, if and when that time comes, commissioner Roger Goodell and the owners will need buy-in from the players. They’ll have it from Vikings quarterback Kirk Cousins.

Cousins himself makes no decisions. It is important to note that just because Cousins is willing to play without fans and possibly be quarantined in one place with the rest of the Vikings, does not mean other NFL players are. However, while this is not a pressing concern for the league until it nears the start of training camp in July, it is important to collect information now. The NFL can use this time to answer some questions.

Are most players willing? Would the NFL Player’s Association fight back on this? Would families be allowed to come or just the athletes and essential staff?

So, finding out what franchise quarterbacks like Cousins think is a helpful step toward an unconventional season happen, if necessary.

Games would not be the first NFL event impacted by the coronavirus. This year’s draft, which was supposed to be in Las Vegas, is now going to be conducted virtually.

While a draft is entirely different from a game, and can be conducted without human contact much easier, it still shows early willingness to makes necessary moves. Playing games in an empty stadium would be different, but so will Goodell not being booed while he announced picks in the first round.

From @NFLTotalAccess: It's unclear if his wife and daughters will get called in to boo him, but NFL Commissioner Roger Goodell will announce the picks, without fans, from his house this year. pic.twitter.com/Z1HzHVYMWP

The draft is one thing. But what indicates what the NFL will do more for games is what other sports do. If the NBA or MLB go back to regular games with fans at any point before the NFL season begins in September, in all likelihood the NFL plays games as normal.

However, if other sports have either not played, or have setup something different to resume play, pro football will have a decision to make. Depending on how the COVID-19 situation looks then, the NFL can follow the lead of other leagues. Or it will carve its own path.