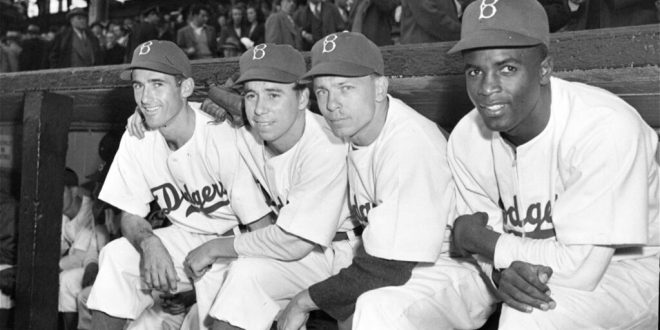 FILE - In this April 15, 1947, file photo, Brooklyn Dodgers baseball players, from left, third baseman John Jorgensen, shortstop Pee Wee Reese, second baseman Ed Stanky, and first baseman Jackie Robinson pose before the opener at Ebbets Field in New York. Robinson broke baseball’s color barrier on April 15, 1947, for the Brooklyn Dodgers and his No. 42 was retired throughout the major leagues in 1997 by then-Commissioner Bud Selig. An annual Jackie Robinson Day started in 2004. Since 2009, all players, managers, coaches have worn his No. 42 to mark the day. Forced from the field by the new coronavirus, Major League Baseball is moving its annual celebration of Jackie Robinson online. (AP Photo/Harry Harris, File)

April 15, 1947. It’s one of the most important dates in the history of Major League Baseball. 73 years ago, Jackie Robinson made his debut with the Brooklyn Dodgers. In doing so, he became the first African-American ballplayer in the MLB.

Each year on April 15, players celebrate Jackie Robinson Day and don the number 42 to celebrate Robinson, whose number is retired throughout the league. With baseball and the sports world on pause, players and organizations sought ways to appropriately celebrate the historic day this year.

Robinson is a hero that broke the color barrier. His impact is evident today, as many current players are players of color.

One example is Chris Archer, who is an African-American and pitcher for the Pittsburgh Pirates.

Robinson opened the door for African Americans in the MLB. Archer also recognized that this created opportunities for other minorities, such as Latin Americans.

It’s a ripple effect: what began as a heroic individual effort to integrate baseball shifted the course of the game forever. For example, international players and players of color are bountiful within MLB organizations.

The amount of African Americans in the MLB was only 7.7% last year. Archer believes that percentage will increase due to the changing culture of baseball.

Players and teams used social media to express their gratitude for Jackie Robinson. For instance, Robinson Cano of the New York Mets shared that he is named after No. 42.

Without Jackie Robinson, none of us minorities would be playing the beautiful game we love today. My name Robinson, is named after Jackie. He is an inspiration, an icon, and trailblazer on and off the field. Today and every day, we honor #42. #Jackie42 pic.twitter.com/1vn5yJjQpG

Mookie Betts, David Price and other members of the Los Angeles Dodgers voiced their love for the legend over Twitter. Jackie Robinson Day means even more to Betts, who is an African American, now that he plays for the same organization as Robinson.

Although having no games on Jackie Robinson Day is unusual, the world still honored him. Baseball’s hiatus gave African-American players a chance to sit back and reflect on Robinson’s impact on the MLB.