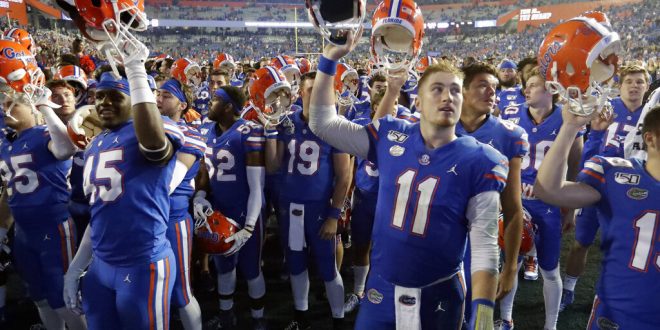 While the sports world has been shut down, the NCAA has began its talks on the fall season. Namely, what could college football look like? Is a 2020 college football season even possible? Right now, there’s no clear answer due to COVID-19, but ESPN’s Laura Rutledge discussed some factors that could play a part in overall decisions.

College football was set to begin on August 29. But Rutledge said this may be difficult. That’s because the NCAA wants college football to be unified, and not all teams may be able to go back and train on their respective campuses in the summer as the virus continues to spread.

Rutledge stressed the importance of this unification.

That being said, she also said a clear decision from the NCAA might need to come sooner, rather than later. Rutledge said this would give the coaches and athletes a “roadmap of what this looks like.”

Despite the uncertainty right now, one thing seems clear: there’s going to be some sort of 2020 college football season.

There’s various scenarios that could play out, in order to bring players and fans college football this year.  Rutledge said one idea is to push the season back. Starting in November could be a possibility. With that, Rutledge said it might just be a shorter season that goes right into the College Football Playoff.

But she also made clear that the NCAA doesn’t want to have to stop playing mid-season.

With the possibility of COVID-19 making a return in the winter, could college football begin in the spring? Rutledge believes that could be a possibility.

Could this alter the College Football Playoff?

Rutledge said that yes, it’s “possible” the College Football Playoff could be expanded. But it’s not likely to be a dramatic change in the playoff structure.

“I think expansion could be nearer in the future than we would’ve thought,” Rutledge said.

She noted that an expanded playoff could release some financial strain, which could be a motivation for the NCAA to consider a larger playoff field.

Although there are different scenarios to the 2020 college football season, it seems that fans will be getting one. It’s just a matter of when.

The introduction of the transfer portal in 2018 forever changed the collegiate sports landscape, a …