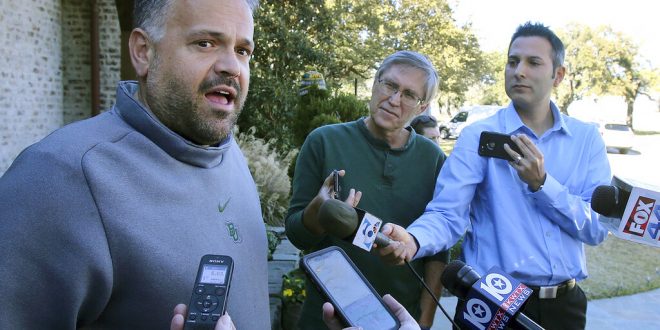 FILE - In this Jan. 7, 2020, file photo, former Baylor head football coach Matt Rhule speaks to reporters outside his home in Waco, Texas. In a normal year, new Carolina Panthers NFL football head coach Matt Rhule would have greeted many of the team's players for the first time with a handshake Monday for the start of the team's offseason workout program. But nothing is normal in the days of a global pandemic. (Jerry Larson/Waco Tribune-Herald via AP, File)

River-Boar Ron is out; Matt Rhule is in

Matt Rhule, the turnaround head coach. Rhule has been the Carolina Panthers head coach for over four months and is already making splashes. Backfield security and new coach signings are just the beginning for Rhule turning the Panthers around.

This is not new to Rhule, though. He has been able to turn programs in college around in a few short years. He led Baylor to an 11-3 season last year. His team had a few legitimate chances to win the Big 12, appearing in the conference championship game. Three years ago, this team was 1-11 under Rhule. A huge turnaround in a short amount of time. He has the opportunity to do that in Carolina, where the Panthers are coming off a 5-11 season. In this case, he doesn’t have to wait for recruits to develop them. The pieces they need to succeed are now already there.

Just days after LSU won the 2020 National Championship, Carolina signed Joe Brady, the Tigers offensive coordinator. Brady turned the Tigers offense into one of the greatest college offenses of all-time. His RPO style offense broke records and helped Joe Burrow win the Heisman. After leaving the New Orleans Saints organization in 2018 to go to LSU, Brady is back in the league. But his offensive weapons on the Panthers look very similar to his national championships Tiger ones. An athletic running back that can run the ball down-hill and catch passes, a talented core of receivers and a quarterback that is comfortable and accurate in the pocket.

Although it seems like Brady is building around these players, he doesn’t have to do much changing to his offense. Let’s review the lineup Brady and Rhule are working with and how it fits into his system.

Starting with a contract extension for one of the most athletic and talented backs in the game, Christian McCaffrey. This is a no-brainer to keep McCaffrey on the team. He is a phenomenal athlete, an intelligent player, and an absolute workhorse. Last season, he became the third player in NFL history to rush for 1,000 and receive for 1,000 yards. Coach Rhule speaks highly of McCaffrey in this interview:

Rhule being an offensive-minded coach has put players in his scheme that can score. Now with the young, stud running back secured, they need a healthy and talented quarterback. Bring in, Teddy Bridgewater. Bridgewater was the backup quarterback on the New Orleans Saints. He started five games last season when Drew Brees injured his thumb. Teddy won five of his five starts, throwing for almost 1400 yards.

Speaking of the Saints, guess who worked there with Bridgewater in 2018? That’s right, Joe Brady. Bridgewater and Brady reunited again. A match made in heaven to go with one of the most athletic backs in the game, Christian McCaffrey. Bridgewater knows the playbook. Which may give the Panthers the upper hand with a shortened preseason.

This is his sixth season in the NFL and could be his breakout season in Carolina.

The Panthers already have established starters in the receiving core. Two 23-year-old wide-outs in Curtis Samuel and D.J. Moore. And more depth was added in the last month. Carolina signed Seth Roberts, Keith Kirkwood, and Robby Anderson. The most intriguing wide-out acquisition here is Robby Anderson, who played for Rhule at Temple. Under Rhule, Anderson set the record for most receiving yards in a game at Temple, 239 yards. The record still stands today.

When you put all of the pieces together on offense, it looks like the team that just won the national championship in college football. Joe Brady has shown that this offense works in college and the NFL. It is only a matter of time before the new and improved Panthers take the field. In my opinion, it will be worth tuning into.