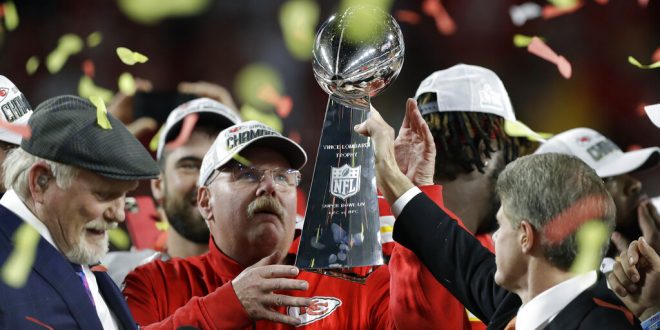 Travis Kelce Dives Into the Future of Chiefs

After coming off another monster year during the Chiefs 2019 campaign, Super Bowl Champion Travis Kelce sets his sights on bringing another world championship to Kansas City.

For the first time in over fifty years, the Kansas City Chiefs hoisted the Lombardi Trophy earning the franchise their second Super Bowl win in team history. However, after making a miraculous comeback to defeat the San Fransisco 49ers 31-2o in the Super Bowl, Kelce remains hungrier than ever.

Here’s what the tight end predicted on ESPN’s First Take when asked about Super Bowl 55:

“I honestly think it’ll be a rematch of Super Bowl 54 [next year].”

With Kansas City returning 20 of its 22 key starters from last season, Kelce’s belief that the Chiefs will appear in back-to-back championships is very much possible.

Possibility of playing with no fans in Arrowhead?

According to Mark Maske of the Washington Post, the NFL began contingency-planning for games being played in empty or partially filled stadiums.

Kelce had thought’s of his own on the matter:

“I don’t think it will affect me. At the same time it is going to be very awkward playing in a stadium with nobody in it.”

The Chiefs star emerged as considerably the best tight end in the NFL throughout his duration in the league. Kelce is coming off a season with 97 receptions, 1229 yards, and 5 total touchdowns. Additionally, he earned his fifth Pro-Bowl selection and another Second-Team All-Pro honor. (2017, 2019)

To pile onto his long list of accolades, Kelce was recently voted to the NFL 2010s All-Decade Team.

Travis Kelce heads into 2020 remaining a reliable top target for quarterback Patrick Mahomes to throw to. Kelce looks to keep lighting up the dynamic Chiefs offense as he continues to make his mark as the best tight end in the game.

For him, winning Super Bowl LIV was only the beginning as he plans to take the league by storm and bring more championships to Kansas City.

Angel is a student at the University of Florida. She is a Multimedia Journalist who is currently a Sports Reporter and Writer at ESPN Gainesville. Follow her on Twitter (@angelcwells) and Instagram (@angel_wells). Be sure to follow her NFL Twitter account to stay up to date with the latest NFL news. (@UpToDate1NFL)
@angelcwells
Previous Chris Leak reflects on his time at UF
Next Walton Discusses Plans Moving Forward With Gator Softball