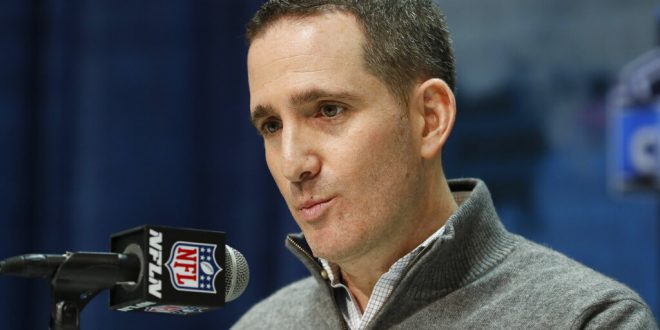 FILE - In this Feb. 25, 2020, file photo, Philadelphia Eagles general manager and executive vice president Howie Roseman speaks during a press conference at the NFL football scouting combine in Indianapolis. The Eagles have eight picks after trading a pair to Detroit to get three-time Pro Bowl cornerback Darius Slay. They have the 21st overall pick, one in the second round (No. 53), one in the third (No. 103) and three more in the fourth. (AP Photo/Charlie Neibergall, File)

“It’s no different than… any draft,” he said of the upcoming event recently. Despite this year’s unique set-up, the Eagles’ goal remains the same: to compete, now and in the future.

Roseman, a UF alum, has been the team’s general manager since 2016. On Thursday night, he and other top execs will bring in a handful of new players to the organization, albeit in a different way than they have in the past. Here’s a look at what the Eagles need going into the draft.

The Eagles need to create depth at this position. Both Alshon Jeffery and DeSean Jackson will be coming off season-ending injuries, which means a solid wide receiver pick is crucial. Many mock drafts have Philly taking Henry Ruggs III with the 21st overall pick, if he’s available. Ruggs, who played at Alabama, has the ability to stretch the field. He posted a 4.27 in the 40-yard dash at this year’s combine and recorded a 42-inch vertical leap. His addition to the roster would give quarterback Carson Wentz some much-needed help offensively.

Talks have circulated that Philly may trade up to get a wide receiver at Pick 14, but Roseman says such a decision has not yet been made.

Right now, Nathan Gerry is Philly’s only definitive starter at linebacker. Adding someone else at the position would lighten Gerry’s load. NFL Network analyst Daniel Jeremiah sees Kenneth Murray as a potential fit. He believes the former Oklahoma Sooner would match up well against Ezekiel Elliot and Saquon Barkley. It’s worth noting that if this is the route the Eagles take at No. 21, it will be their first time taking a linebacker in the first round in 41 years.

Though not as urgent as the other two positions, an addition to the ground game would also bolster the offense. Darren Sproles’ retirement and Jordan Howard’s free agency departure left the Eagles’ running back room a little sparse. Here, they could pick up a Gator. Florida standout Lamical Perine would fit well with the team, according to Sports Illustrated’s Demetrius Harvey. His ability to move the ball on third down is something sought by many offenses. With an average of 125.23 yards per season, he also has little wear and tear on his body, another reason the Eagles could snag him.