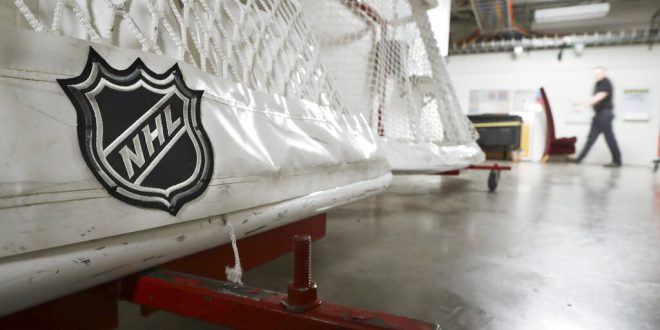 FILE - In this March 12, 2020, file photo, goals used by the NHL hockey club Nashville Predators are stored in a hallway in Bridgestone Arena in Nashville, Tenn. The Ottawa Senators announced late Tuesday night, March 17, 2020, one of their players has tested positive for COVID-19, has mild symptoms and is in isolation. (AP Photo/Mark Humphrey, File)

Throughout the past few days, there has been no timetable for the return of the NHL season. Due to COVID-19, the NHL has to postpone its season, with the playoffs right around the corner. Not only the NHL, but other sports leagues have postponed or even canceled their season. The last NHL game played was on March 11. The NHL, if the season comes back, consider having the playoffs in a neutral site. Emily Kaplan, an NHL reporter, explains a few ideas the National Hockey League have.

Gary Bettman, the NHL commissioner, has explained the possibility of not finishing the regular season. Few teams, like the Rangers and Islanders, could have their season finished with this ideal. Both teams are less than three points off a wild-card spot in the Eastern Conference.

In the Western Conference, Vancouver, and Minnesota are less than two points away from being in the wild-card spot. In general, this could be really good, or really bad, for hockey teams.

Our weekly rundown of where things stand during the NHL's pause including
-latest possible return timeline
-update on neutral site games
-games with no fans?
-comments from NHLPA exec Donald Fehr, and more. https://t.co/iBP3uOjjFC

Teams that are nearly Safe

Tampa Bay Lightning: The Lightning has show strong prowess the past few seasons, and continue to do so. However, they are eight points behind Boston but lost three of their last five games before the season was postponed. They also have 12 games left in the season.

Like most sports, hockey will end during the Summer, or even later. With no-one knowing when this pandemic will end, all sports fans will be waiting for the news that sports are back. For now, all fans can do is wait and hope for the best for the future.