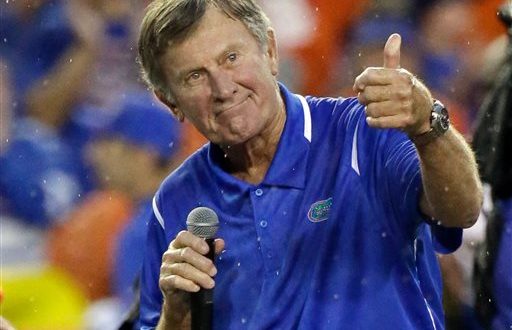 As the Head Ball Coach celebrates another year around the sun, the football world is reminiscing on some of his classic moments in the game. Spurrier’s impact goes far beyond football.

Noah Brindise was just one Florida quarterback lucky enough to work with the Head Ball Coach. Brindise started his career as a walk-on and held the QB position from 1995-97.

He said Coach Spurrier gave him a shot most coaches probably wouldn’t have.

“Most head coaches at an SEC school wouldn’t really coach the walk-ons like he coached me. Low and behold, I ended up becoming a halfway decent player. Because of the way things played out, I got a chance to play, and he’s been a mentor for me ever since.”

Brindise’s relationship with Spurrier goes much further than his playing years in Florida.

Following graduation, Brindise returned to Florida’s football program to work as a grad assistant. He worked under coach Spurrier with the Gators from 1999-2001.

“Those years were really interesting for me because I got to know him on a personal level, as opposed to him just being your coach. That’s when I got even more appreciation for the man,” Brindise said.

Next, he followed Spurrier to the Washington Redskins, where he worked as the quarterbacks’ coach from 2002-2003.

“I think working for him was probably easier than playing for him.”

Although Spurrier built him from a walk-on to a starting quarterback, Brindise said the life lessons that Spurrier taught him meant much more than any football fundamental he learned from him.

“Lessons that he taught us really transcended past football. Just his nature of doing things right. You can look back at his history, and there’s not a lot of blemishes. He always did things the right way. He never strayed from being himself. He was different. He knew it, and he didn’t care.”

“It’s amazing, when you think about all the stuff he’s accomplished in his life. He’s a gem. He’s a unique person. I’m really fortunate to have crossed paths with him and spent so many years with him and his family.”

Brindise doesn’t work or play for Spurrier anymore, but they still have a strong relationship.

“Even now, we’re really close. I really enjoy our time together. I don’t work for him anymore, but he’s still my coach. He’s one of the most influential people in my life, and that won’t change.”