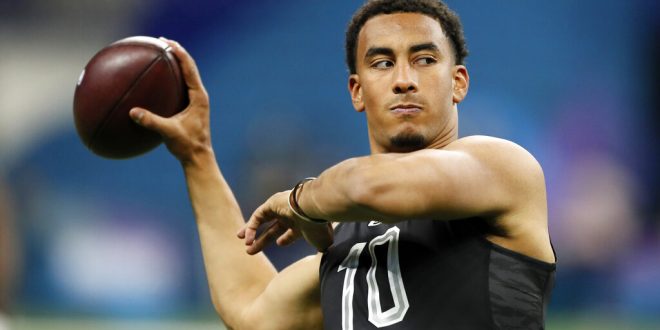 FILE - In this Thursday, Feb. 27, 2020, file photo, Utah State quarterback Jordan Love works out at the NFL football scouting combine in Indianapolis. For the first time in two decades the New England Patriots are preparing for the NFL draft without a clear picture of who their starting quarterback will be in 2020. (AP Photo/Charlie Neibergall, File)

He’s not receiving the attention of Tua Tagovailoa and Joe Burrow, but Utah State gunslinger Jordan Love has the tools to be a quality quarterback in the NFL.

During his collegiate career, Love threw for 8,600 yards, 60 passing touchdowns and 29 interceptions.

He was most productive during his sophomore season, throwing for 32 touchdowns to just six interceptions. This past season though, he was plagued by his carelessness with the ball.

The junior gave up 17 interceptions in 2019, and that negative production won’t cut it in the NFL.

Love looks to be a low first-round pick by many experts right now. Behind Burrow, Tagovailoa and Oregon quarterback Justin Herbert.

In this mock draft by CBS Sports, Love goes 24th to the New Orleans Saints. It makes sense due to Teddy Bridgewater leaving for the Panthers and Drew Brees inching closer to retirement.

His ability to extend plays and the cannon he has for an arm reminds many of what Mahomes brings to the field on Sundays.

While that’s a nice comparison, he’s still a bit of a high-risk, high-reward type of prospect.

The aforementioned 17 picks he threw last season was the most in the FBS.

“Obviously the 17 interceptions was way too many for me,” Love told Sportscenter. “I did a lot of bad things for the team that year, but for me it wasn’t really that much different besides the turnovers and the bad decison making.”

Love went on to say that he watched a lot of film and did his best to correct those mistakes. He went on to mention how excited he is to get to Thursday night.

While he said he has no idea where he’ll land, he said it’s going to huge moment for him, his family, and the Bakersfield, California community.