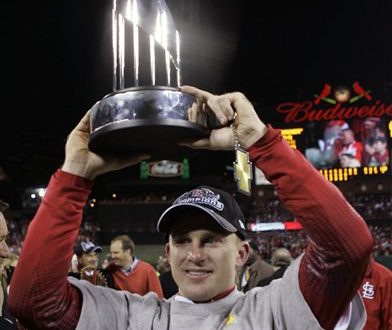 David Eckstein is a former walk-on infielder for the Florida Gators who went on to play 10 seasons of Major League Baseball for five different teams. He is a two-time World Series champion and is still involved with the league, today. He is now a “Special Assistant” in the Pittsburgh Pirates organization.

His brother, Rick Eckstein, is the major league hitting coach for the Pirates. In 2018, when he was interviewed by Pittsburgh, he told the organization to hire his brother David. Pittsburgh was one of the organizations that reached out to David following his professional career. The organization was all in and they hired both brothers.

David started as the replay guy for the team. The booth was a stressful start to his career. In an interview with on Sportscene with Steve Russell on ESPN Gainesville, Eckstein says “it is a lot tougher than what people think.” Moving past the replay portion of his career, David now works on the offensive side of the ball and appreciates the organization allowing him to coach the players. Specifically, how they utilize the player’s abilities. With all the information available on players such as statistics, this can be used to the team’s advantage. Eckstein has baseball instincts, similar to the players he coaches. But combining these two traits of coaching knowledge and player instinct brings out the “ability of a coach to actually coach a player.” The organization actually allows them to be “still be baseball coaches.”

Prior to his big league career, Eckstein was a walk on at Florida; he had one chance and seized the opportunity.

In 1994, Eckstein enrolled at the University of Florida. As an undersized infielder, he would later earn a scholarship and this led to an opportunity for his successful career. He earned first-team All-SEC back-to-back seasons, including All-American accolades. Under coach Andy Lopez in 1996, the Gators baseball team won 50-games and placed third in the College World Series.

In the interview with Steve Russell, he asked Eckstein how it was to play for coach Andy Lopez, who was his second coach at UF. Eckstein said for his game, Lopez was “the absolute perfect coach…kind of like my dad.” His first-year coach, Joe Arnold, gave him his opportunity as a walk-on and let the players do their own thing. And with Lopez, he was “in your face” and the “driving force to actually make you better.” Both were beneficial to his career. But Eckstein has learned that “each player has a different way how he has to be coached.” Not saying one is better than the other, but being able to bring out the best abilities of each player. This has translated into his coaching career.

He did not make it to a roster until 2001 after the Anaheim Angels picked him up off the waivers. From 2001-2004, Eckstein played for the Angels and won a World Series with the team in 2002. That year, he led the major leagues in grand slams with three.

Following his time in Anaheim, he went on to play for the St. Louis Cardinals. In his first two seasons, he was an All-star and in 2006, the Cardinals won the World Series where he was named MVP of the Series.

After some time with the Padres, Diamondbacks, and Blue Jays, Eckstein called it a career after 10-seasons. He knew that his 10th season was his final one because his body was breaking down. A conflict of interest with his rehabbing and his wife starting her own company, he stepped away from the game to focus on her career. He felt wanted by the league, but his decision was made.

The love of the game is clearly still there. He also says in the interview, that he thinks it’s a shame to see such a good Florida Gatorteam not be able to play out the season due to the COVID-19 virus. He speaks for everybody in Gainesville.

Gator baseball is on a three-game win streak ahead of its weekend matchup. After taking …