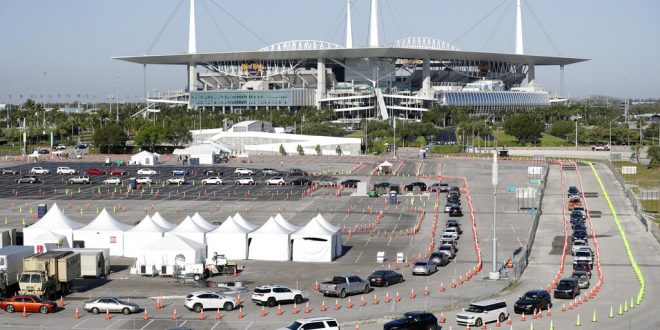 FILE - In this March 30, 2020, file photo, cars line up at a drive-thru coronavirus testing site in front of Hard Rock Stadium in Miami Gardens, Fla. Nobody can say with precise certainty how many coronavirus tests that the NBA, NHL and Major League Baseball would need before those leagues can resume playing games. (AP Photo/Wilfredo Lee, File)

The Dolphins made a splash this offseason with free agency and the draft. Now, they’re in the news again with a potential stadium plan to allow limited fans if the coronavirus pandemic continues into the NFL season.

Miami, who plays in Hard Rock Stadium, has a capacity of 65,000 seats. The stadium proposal could limit seating to 15,000 and will adhere to all social distancing guidelines.

Since there is so much uncertainty regarding the future of the league, despite free agency and the draft remaining on schedule, it’s important to know this is just a plan. Dolphins beat reporter Cameron Wolfe goes into depth about Miami’s plans.

Wolfe emphasizes that fans will have to be flexible. This would be a difficult transition for fans but is necessary for the possibility of spectators.

Another key point of Wolfe’s regards concessions and sales. He says fans and workers will have to wear masks. In addition, it will all be done through mobile ordering.

When it comes to fans leaving the stadium, Wolfe says it may have to be a “church-like” setting where certain sections are staggered. This is where fan flexibility will come into play again.

What does this all mean?

The real answer is nothing right now. That’s because there is so much uncertainty regarding the league. But still, it’s a positive sign that such a plan is being talked about at this point. Also, Wolfe talks about how the Dolphins are doing this to get ahead of the game.

Here’s the kicker in all of this. The obvious barrier is player safety and it’s tough to estimate what that will look like in September. National Institute for Health Director Anthony Fauci says with things how they are right now, no season could be played. He added how this could change by the seasons schedule start time.

In order for stadium plans like this to work, teams will need compliance with government health officials and the league. One of the main obstacles the league will need to overcome is widespread testing.

As we’ve seen, the NFL has yet to change its schedule, like most other sports. Right now, it just seems like Miami’s proposal is an attempt to keep live sports a reality.