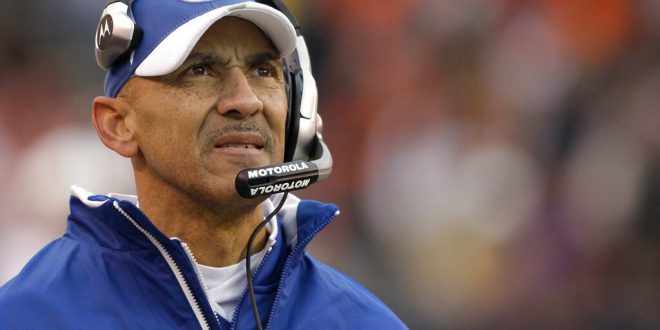 FILE - In this Nov. 30, 2008, file photo, Indianapolis Colts coach Tony Dungy watches from the sideline as his team plays the Cleveland Browns during the third quarter of an NFL football game in Cleveland. Dungy is the first African-American head coach to win a Super Bowl and has been a strong advocate of more diversity in coaching hires. (AP Photo/Amy Sancetta, File)

There are 32 head coaches in the NFL, but only four of them are a minority. Three are black (Mike Tomlin, Anthony Lynn and Brian Flores), while Ron Rivera is the lone Hispanic head coach.

In order to fix this problem, changes are necessary. One change is already official.

This is a step in the right direction for the NFL. However, more action is necessary to solve the issue of the lack of minority coaches.

NFL owners will vote on a new proposal that improves the draft position of teams that hire a minority candidate as head coach or general manager. Former players and coaches have mixed feelings about this possible rule change.

Former NFL player and current ESPN analyst Marcus Spears is a proponent for minority coaches and general managers in the league. However, he does not think that this proposition should have to be necessary in order for minorities to get these jobs. He believes that the problem lies with the owners.

“We all know what the elephant in the room is,” Spears said. “These teams have been owned by white men and they felt more comfortable hiring guys that look like them. So, to have to incentivize for African-Americans to get jobs as general managers and head coaches is disheartening in 2020 in the NFL.”

Former minority NFL head coach Hue Jackson suggested that team owners are not entirely at fault for the hiring problems. Jackson remembers that no franchises hired minority coaches for the majority of the league’s history.

Regardless of where the issue stems from, Spears and Jackson agree that it needs to be solved. Spears expressed his frustration with the lack of African Americans in coaching and management positions.

There is an aura of uncertainty surrounding the upcoming vote on the NFL’s proposal to incentivize minority hires. No matter the outcome, the proposal shows that the league is making strides to fix its lack of minority coaches.

“Being the nexus of change requires trust and hard conversations,” Jackson said. “I commend the league for trying to take a stance and do something to move the needle a little bit.”