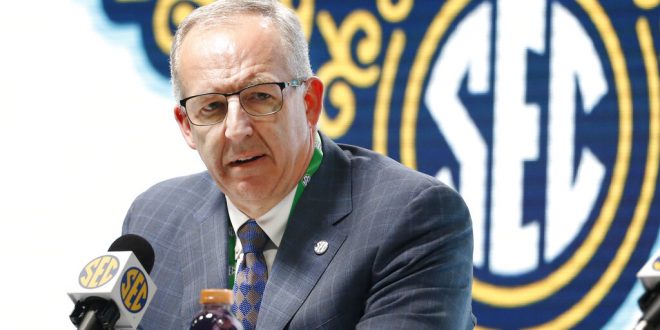 FILE - In this March 11, 2020, file photo, Southeastern Conference Commissioner Greg Sankey speaks at a press conference in Nashville, Tenn. The Power Five conferences spent $350,000 on lobbying in the first three months of 2020, more than they had previously spent in any full year, as part of a coordinated effort to influence Congress on legislation affecting the ability of college athletes to earn endorsement money. The Southeastern Conference was the biggest spender, hiring three lobbying firms and paying them a total of $140,000, according to lobbying disclosure forms reviewed by The Associated Press. (AP Photo/Mark Humphrey, File)

A monumental decision will be made this Friday when SEC officials vote on if campuses should open up their athletic facilities to voluntary workouts.

How will the vote turnout?

The vote being presented to school presidents and chancellors has these workouts starting in June. Oklahoma Sooners Head Coach Lincoln Riley says college football must be patient and can’t rush players returning back to school.

Even so, ESPN college football writer Sam Khan Jr. thinks he knows how the vote will go. Khan joined Steve Russell on his show where Khan was asked if he thinks the SEC will vote to allow their players back on campus.

Khan brings up an interesting point that will pivot many of the discussions. He says that one of the “most important things is uniformity.” That could be difficult with different states and cities having different rules from one another.

On the point of geography, it’s interesting to note that the SEC seems to be ahead of other conferences. For example, the Big 12 has yet to set a date for a vote of this kind. Stay at home orders are expected to run through at least June out on the West coast. Khan opens up about this reality.

Many expect the NCAA to allow voluntary on-campus workouts beginning in June, but some conferences have their own restrictions to lift.

Imagine the SEC lifting theirs while the Big 12 doesn't.

If voted on, how will it play out?

Khan emphasizes uniformity again. He believes there will be guidelines for each school to follow to implement proper procedure. Khan also explains that this plan is mainly for players who have access to their school and those who can get to facilities without restrictions.

He adds that there will be no decisions made on team practices, walkthroughs and other group activities. Basically, the SEC is saying if we’re going to allow you back on campus with open facilities, voluntary workouts only. Khan says the timeframe on those decisions is about 6-8 weeks.

What about students and campuses in general reopening?

Khan believes that in order for college football to be played, students must be on campus in some regard. He says this based on the argument that if it’s unsafe to have people on campus or in a classroom, the same applies with players on a football field.

He emphasizes that it doesn’t make sense to have a college football game but not be able to have kids in a classroom.