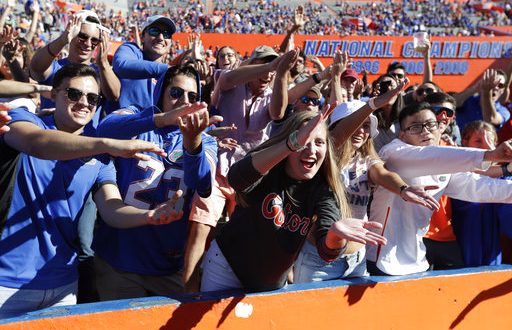 Florida fans do the 'Gator Chomp' as they cheer during the second half of an NCAA college football game against Idaho, Saturday, Nov. 17, 2018, in Gainesville, Fla. (AP Photo/John Raoux)

The debate over the Gator Bait chant continues since UF President Kent Fuchs announced its retirement on Thursday. President Fuchs listed this decision under the topic of moves to better reflect the university’s values.

While some students, fans and alumni embraced the decision, others made their displeasure heard. Those who favor the move think the chant long should have been on gone or became in favor of the move after learning the history. Those opposing the decision feel the chant has no ties to the racist history behind gator bait. They claim it’s a Gators tradition as well. Some declared they continue to do it at games when it is retired.

Debate is also arising on the topic of the Gator chomp and its possible discontinuing.

On Friday, former Gator football player Lawrence Wright joined Steve Russell on the Sportscene to discuss the matter. Wright, who is black, coined the phrase “if you ain’t a Gator, you’re gator bait.” Wright “fully understands” what President Fuchs is trying to do. However, he doesn’t agree with the decision.

Looking at the History of the term “Gator Bait”

Dr. Paul Ortiz of UF’s history department joined WRUF’s “The Tailgate” to discuss the chant. While he can’t tell the history of it being the football team’s chant, Dr. Ortiz can talk about it from the historical perspective of Florida tourism. According to Dr. Ortiz, in the early-20th Century, there used to be postcards of alligators “devouring” black babies and black people. The postcards were meant to attract tourists from the north and Europe. The cards were meant to tell a folk story about what gator hunters did to captures gators.

When asked about President Fuch’s decision, Dr. Ortiz said he was relieved. He said that there were colleagues who wouldn’t go to games because of the chant, and many were upset about it. Ortiz said this is the time to listen to those who are upset and address these issues.

There are still those who claim the whole racist origin of the chant is made up or exaggerated. Dr. Ortiz said he would direct them to the “scores and scores of newspaper articles” that claim that this was actually happening. Ortiz begs the question: if this didn’t happen, why was it talked about so much?

Dr. Ortiz encourages those who aren’t sold on the claim to simply google the topic, and they would get plenty of search results for it.

Harrison is a sports coordinator at ESPN 98.1 FM/850 AM WRUF. He served as a beat writer for Florida Gators football for the 2019 and 2020 seasons. He also contributes to WRUF's Gainesville Sports Center segments and makes appearances on the Clash on Harp on Sports. Harrison has been a content writer for WRUF since January 2019 as well.
@HarrisonSmaj
Previous UF To Scrap “Gator Bait” Chant
Next Bubba Wallace Finds Noose in Stall