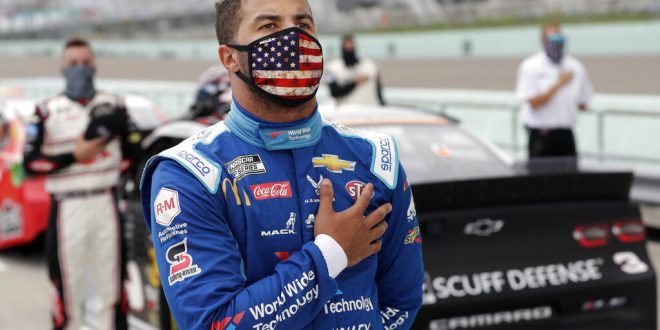 It hasn’t even been two weeks since NASCAR banned the confederate flag. On Sunday afternoon, at the Talladega Superspeedway, a noose was found in the garage stall belonging to Bubba Wallace. NASCAR and the FBI have started investigations into the act. Wallace, NASCAR’s only black driver, called the act a “despicable act of racism and hatred.”

Earlier this month, Bubba Wallace spoke out in the call for change in the fight against racism. One of his calls was for the banning of the confederate flag at NASCAR races. NASCAR took to opportunity to do just that. Before the race was rained out, a plane could be seen overhead towing the confederate flag. Along with it: a sign saying “defund NASCAR.” A group of cars draped with the flag drove by the venue in protest as well.

Fellow Drivers Speak Out Against Act

NASCAR drivers came to Bubba Wallace’s side after the incident.

Driver Michael McDowell tweeted, “God help us. The level of evil it takes to do something like this is disgusting. This is enraging and heartbreaking all at the same time. ”

The race in which the incident occurred was postponed due to rain until Monday. Wallace will participate in the race.

Harrison is a sports coordinator at ESPN 98.1 FM/850 AM WRUF. He served as a beat writer for Florida Gators football for the 2019 and 2020 seasons. He also contributes to WRUF's Gainesville Sports Center segments and makes appearances on the Clash on Harp on Sports. Harrison has been a content writer for WRUF since January 2019 as well.
@HarrisonSmaj
Previous Lawrence Wright on Gator Bait Chant
Next No Deal: Imposed MLB Season To Come