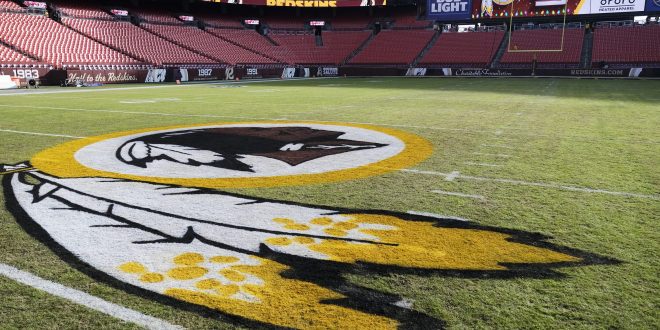 FILE - In this Dec. 22, 2019, file photo, the Washington Redskins logo is seen on FedEx Field prior to an NFL football game between the New York Giants and the Redskins in Landover, Md. Washington state Attorney General Bob Ferguson says Seattle-based Amazon will begin pulling Redskins team merchandise from its online marketplace. Ferguson urged the online giant to remove such merchandise it because of growing calls for the team to change what he called their use of a racial slur in the name. (AP Photo/Mark Tenally, File)

The Washington Post released an explosive story on Thursday that alleges an environment of sexual harassment and verbal abuse within the toxic culture of the Washington Redskins organization.

Fifteen women came forward, 14 of them anonymously. All of them spoke out on the horrible culture within the Redskins’ organization from 2006-2019.

While none of these men are still with the club, all of the complaints came during the tenure of controversial owner Daniel Snyder. Since purchasing the team in 1999, Snyder has ruffled feathers around the league with his refusal to change the team name until finally caving this week when FedEx threatened to pull its money for naming rights to the stadium.

Success has not come to the nation’s capital either. Since Snyder became owner, the Redskins have had four times as many coaching changes (8) as playoff wins (2.)

The allegations include inappropriate comments about their physical appearance. More severe incidences include allegedly selling access to Redskins cheerleaders to woo clients to purchase suites for games.

Snyder originally declining to comment when the story was being written. However, he later released a statement this morning vowing change within his organization.

“The behavior described in yesterday’s Washington Post article has no place in our franchise or society,” Snyder said. “This story has strengthened my commitment to setting a new culture and standard for our team, a process that began with the hiring of Coach (Ron) Rivera earlier this year.”

While Rivera has the massive job of spearheading a culture change across the organization, Adam Schefter of ESPN said the league may have to step in and discipline the organization.
Sound used in this story courtesy of ESPN and ABC Newscall.*
Share