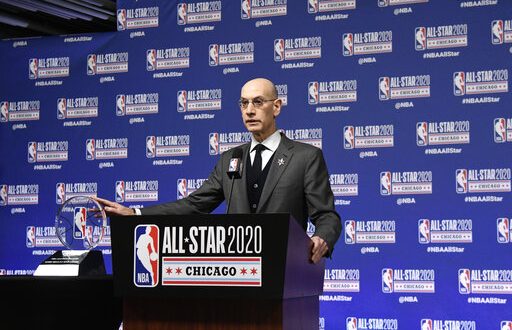 NBA going all in on social justice issues

The NBA regular season is coming back July 30, and players will have to option to display social justice messages on the back of their jerseys.

“We gonna be down here hooping, but at the same time, we gonna keep [social justice] on the front of everybody’s mind.”@CP3 calls for justice for Breonna Taylor and explains how NBA players are going to make an impact from the bubble. (via @MariaTaylor) pic.twitter.com/vXZUoBiETI

How many players will participate?

The NBA has approved several sayings that will go on the back of jerseys. Marc J. Spears reported 285 players will have a saying on their jersey.

As of Wednesday afternoon, 285 of the expected 350 eligible NBA players have decided to pick social justice messages to put on their jerseys. Info on how many opted not to have a jersey message and more in @espn @TheUndefeated story. https://t.co/9FH82u6rvp

Also, Chris Haynes tweeted what some players will specifically be wearing

Yahoo Sources: NBA social justice statements to be worn on back of jerseys for the restart:

One star player who opted to not put a message on his jersey is Lebron James.

LeBron said he's one of the few NBA players who will forgo a social justice message on the back of his jersey when the season resumes.

"I don't need to have something on the back of the jersey for people to understand my mission and what I'm about." https://t.co/udgrzK8JBP

Silver and the players saw their best chance at creating change was with their platforms on the NBA stage. However, Silver understands social change is not created through jersey phrases alone.

Also, Silver said the most important thing going on in the league right now is the players showing a long-term commitment to change.

With that in mind, Silver said the NBA players and owners are working on a plan to create a foundation that will help further their efforts.

Overall, Silver believes the NBA can come together this season and promote change.

Looking ahead to NBA games

Finally, the NBA will restart on Thursday. First, it’s a doubleheader with the Jazz playing the Pelicans followed by the Clippers playing the Lakers. Then, the rest of the league gets into action with six games played on Friday and Saturday.

Also, with MLB already having trouble after its first weekend back, all eyes will be on the NBA to see how it handles the first weekend of regular-season games.