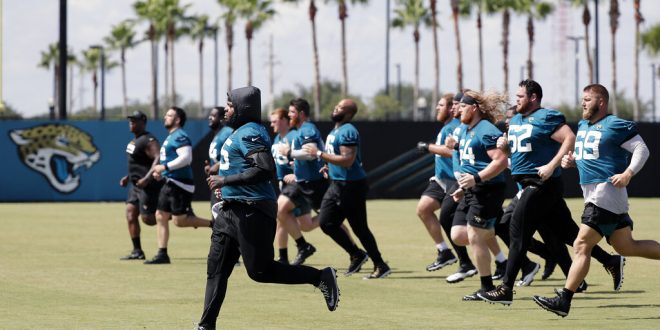 Keenan McCardell Getting His Jags Ready for Season

The Jacksonville Jaguars are less than a month away from their first game of 2020. During camp, wide receivers coach Keenan McCardell is getting his receivers ready for the season. He’ll be working with a mix of experienced players and incoming rookies.

There is also a variety of different types of body builds on the staff for the team to work with. McCardell likes that his squad has this variety of body types on the receiving core.

McCardell will be working alongside offensive coordinator Jay Gruden starting this season. This is not his first time working with a Gruden. During his time in Tampa Bay, McCardell played under both Gruden brothers. Jay was the Bucs offensive assistant, while Jon was the head coach.

McCardell said he thinks Jay Gruden’s style is a lot simpler compared to his brother’s. He said the players seem to be picking up the plays pretty quickly.

Working Around the Pandemic

Playing through the COVID-19 pandemic means players could go down at any time. Because of this, McCardell is trying to get everyone as ready as possible, so they can step up when needed and as expected.

McCardell has been making sure players stay safe when they are off the field. He reminds them of what is at stake if they are not careful.

Keenan McCardell was a member of the Jaguars as well during his playing days. He took the field for Jacksonville from 1996 to 2001. During his time with the Jags, McCardell collected over 6,300 receiving yards and 30 receiving touchdowns.

McCardell departed for the opposite coast of Florida in 2002 and won a Super Bowl with the Tampa Bay Buccaneers. He retired after the 2007 season as a member of the 10,000 receiving yards club. McCardell has been a wide receivers coach for a decade and returned to Jacksonville to take on that role in 2017.

Harrison is a sports coordinator at ESPN 98.1 FM/850 AM WRUF. He served as a beat writer for Florida Gators football for the 2019 and 2020 seasons. He also contributes to WRUF's Gainesville Sports Center segments and makes appearances on the Clash on Harp on Sports. Harrison has been a content writer for WRUF since January 2019 as well.
@HarrisonSmaj
Previous Magic Upset Bucks; Heat Upset Too
Next Point wins it in OT, Lightning Are Moving On