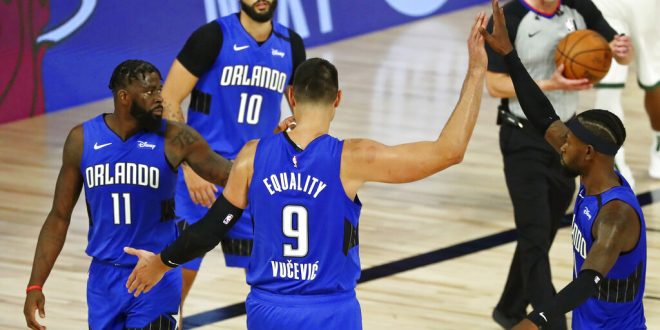 Those who say they saw this coming are lying between their teeth. The Orlando Magic beat the Milwaukee Bucks 122-110. The Bucks entered the game as the top seed in the Eastern Conference. The Magic entered as the lowest.

Last year, Milwaukee swept the eighth seed out of the first round. In 2020, because 2020 has to keep getting weirder, they start off behind.

Milwaukee got off to an 8-4 start in the first couple of minutes of the game. Orlando soon took the lead and never gave it back. The Bucks would make it a single-digit game multiple times but couldn’t overcome the Magic.

Nikola Vucevic was the top scorer of the night, putting up 35 points for Orlando. He even outscored the reigning MVP in Giannis Antetokounmpo (31 points). Terrance Ross scored 18 points off the bench for the Magic, while Markelle Fultz and Gary Clark scored 15 points for Orlando.

After the game, Ross said Orlando stayed focused and was prepared for Milwaukee that night.

Antetokounmpo said while the Bucks played hard, the Magic had a better night.

Had to get an obligatory pun in there somewhere. Moving on.

After losing two out of three to Indiana in the return schedule, the Miami Heat got the W when it mattered most. They defeated the Pacers in Game 1 by a score of 113-101.

The Heat’s offense broke out after being held to 92 points by the Pacers in the two prior bubble games.

Jimmy Butler scored 28 points for Heat. Butler nailed 10 of his 12 free throws and was perfect from beyond the arc. Goran Dragic was right behind him, scoring 24 points including four baskets for three in the game.

Malcolm Brogdon and TJ Warren both put up 22 points for the Pacers. Warren’s five missed three-point shots would be the difference in the final score.

Harrison is a sports coordinator at ESPN 98.1 FM/850 AM WRUF. He served as a beat writer for Florida Gators football for the 2019 and 2020 seasons. He also contributes to WRUF's Gainesville Sports Center segments and makes appearances on the Clash on Harp on Sports. Harrison has been a content writer for WRUF since January 2019 as well.
@HarrisonSmaj
Previous SEC releases 2020 football schedule
Next Keenan McCardell Getting His Jags Ready for Season