The P.K. Yonge Blue Wave football program kicked off their 2020 season with a Friday night lights special that they are looking to make a tradition.

The idea was collective among the players and coaching staff to emulate a combine and then follow it up with a blue versus white scrimmage, resulting in a 12-12 tie. This combine-like experience also included three alumni speakers, 40-yard dash times, bench-pressing and a press conference.

The start of this new tradition kicked off with three keynote speakers who have been a big part of the Blue Waves football program over the years. Former NFL players Willie Jackson, Chris Doering and Shane Matthews emphasized how special their high school football experiences at P.K. Yonge were and gave words of advice to the young athletes.

If three former professionals and P.K. Yonge athletes were not enough of a testament to how unique this program is, try 17 transfers this season. Blue wave head football coach Marcus McDonald said he believes it is a reflection of the way the players carry themselves and the family-like atmosphere of his program.

Blue Wave Head Coach Marcus McDonald cherished the opportunity to get his players’ feet wet again in a scrimmage before their first game. His players have stayed healthy all summer and are prepared to continue to do so this season.

Small is Grateful for Upcoming Season

A.J. Small, starting QB for the Blue Wave, was thankful for the support of everyone who came out to the event and said his team is energized and has a goal this year to go deep in the playoffs and have a winning record.

“It’s great to come back and play as a team, but it’s very different because we have to be six-feet apart. We are just taking it all in because this could be our last chance playing football and it’s just great that we are playing football.”

The Blue Wave plan on live streaming games for family members and fans this season.  This is due to capacity will be limited due to COVID restrictions.

“If you walk around the stadium right now,” P.K. Yonge Athletic Director Kelly Barrett said, “I’m sure you’ll see everyone in masks, and pretty much everyone is bought in. We are just trying to keep transmission down and to keep the kids safe on the field. That’s our ultimate goal: to allow the kids to participate.” 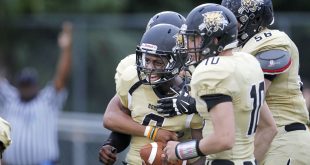