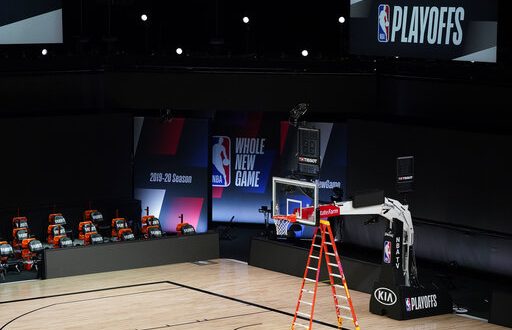 The NBA basketball arenas are empty inside the bubble at Walt Disney World, Friday, Aug. 28, 2020, in Lake Buena Vista, Fla. The NBA playoffs will resume Saturday after the league and the National Basketball Players Association detailed the commitments that made players comfortable continuing the postseason. In a joint statement released Friday, the sides say they will immediately establish a social justice coalition, made up of players, coaches and owners, that would focus on issues such as voting access and advocating for meaningful police and criminal justice reform. (AP Photo/Ashley Landis, Pool)

Over the course of the last few days, athletes from numerous sport leagues have taken a stand in the fight for racial equality in the U.S. Games not only in the NBA, but in the MLB, NHL, WNBA and MLS have all been postponed in response to the shooting of Jacob Blake that occurred on Sunday in Kenosha, Wisconsin.

Going into Thursday, there was much speculation surrounding the fate of the NBA season. Players and coaches met well into the early morning hours discussing issues following the postponement of three games Wednesday evening.

On Thursday morning, after meeting with league executives, owners and coaches, the players made the decision to move forward and play out the rest of the NBA season.

While the NBA was one of the first leagues to boycott competition this week in hopes of inspiring change as it relates to racial injustice, a number of other sports have also followed in the league’s decision to not play, as well.

Many athletes and coaches have been vocal over the course of the last few days as it relates to the topic of equality around the country. Three games were postponed in the MLB on Wednesday, and on Thursday, seven more games were put off, as well.

The Miami Marlins-New York Mets game was one of Thursday’s contests that was postponed. And Mets outfielder Michael Conforto explained what went into the team’s decision to not take the field.

Martinez said change needs to happen. And he was behind his players’ decision to support their fellow peers and not play.

The call for action has not only spread through the MLB, but in the NFL, too. Arizona Cardinals head coach Kliff Kingsbury said that he and those in the Cardinals’ franchise want to make sure players know that they have their support and will help them in anyway possible.

What has happened the last several days throughout the sports world can arguably be described as historic. Leagues all across the country have come together hoping that this movement will spark some sort of change in the near future.

Certainly, the message was heard. But will change occur? Only time will tell.

*** Sound used in this story courtesy of ESPN.