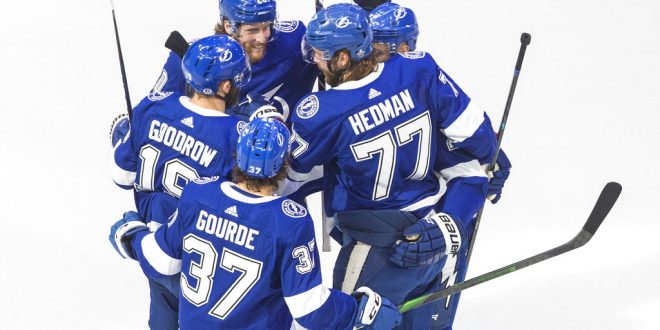 The Tampa Bay Lightning squeaked by the New York Islanders with a 2-1 victory in Game Two of the Eastern Conference Finals. Nikita Kucherov scored a goal in the final 10 seconds giving the Lightning the 2-0 lead in the series.

The Islanders took the early lead with less than two minutes off the board. New York’s Nick Leddy moved the puck down the right side up the ice and behind the goal. Leddy from behind the goal passed it to teammate Matt Martin sitting right in front of the goal. Martin shot the puck into the upper left corner for the first goal of the game.

The Islanders were 7-2 in the postseason when scoring first. The score remained 1-0 until the end of the first period.

From the first goal to the second goal, New York outshot the Lightning 12 shots to three. In fact, the Islanders took more shots in the entire game with 28 compared to Tampa Bay’s 21 shots.

Tampa Did Not Quit

Despite the Lightning only having six shots in the first period they made it count. Victor Hedman banged in a shot from the back of the offensive zone immediately following Barclay Goodrow winning a face-off.

The game, after the first period, tied up at one apiece. Neither team would see another goal until the final second of the third period.

Andrei Vasilvesky should get a lot of the credit as he had to save 14 shots including two very close calls near the net. Vasilvesky ended the night with 27 saves and allowed just one goal. Tampa Bay attempted to help their goalie in the second period by more than doubling the number of shots taken. Unfortunately none of those shots amounted to a goal.

The Lightning defense slowed down the New York offense, allowing just 11 and eight shots in the second and third periods. In the final 20 seconds, the Lightning fought hard taking three consecutive shots with the final shot hitting the net with just about eight seconds left to play in regulation.

Yanni Gourde got it started breaking away from the Islanders down the ice but the shot was blocked. Ondrej Palat a few seconds later had a chance in front of the goal but missed wide right. After the Lightning retrieved the puck for the third time, Kucherov took a hard shot from the right of the goal giving the Lightning the 2-1 victory over the Islanders.

Only two players in NHL history have scored a later game-winning goal in regulation during a Conference Finals / Semifinals contest than @86Kucherov. #NHLStats #StanleyCup pic.twitter.com/wUVuI8WXn4

Win in Any Fashion

So far Tampa Bay has dominated the postseason scoring almost four points a game and outscoring their opponents 43-25. The Lightning, missing a few key players, found a way to win a tight one against a great opponent. It was just three days ago, they defeated the Islanders in Game One 8-2.

Brayden Point left the game in period two, leaving the Lightning with just nine forwards on the roster. Tampa Bay has lost one game in both the previous playoffs series.

The Lightning will look to overcome injuries and take Game Three scheduled for Sept. 11.