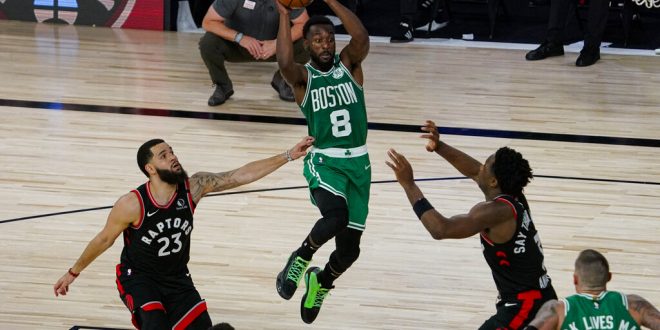 Wednesday night’s 125-122 win over Boston showed that. Facing elimination, key Toronto players stepped up and hit clutch shots to keep them in the game.

With two minutes left in the first overtime period, Boston’s Kemba Walker hit an apparent dagger of a three-point shot to give the Celtics a three-point lead with two minutes remaining. However, Toronto’s Norman Powell quickly answered with a corner-three off of a Fred VanVleet assist.

In the second overtime period, Boston’s Marcus Smart hit a step back three-pointer to put the Celtics up three with 1:27 left. Yet again, Toronto answered the call. Powell again hit a deep three to tie the game, and OG Anunoby hit the three-pointer to take the lead. The Raptors led for the rest of the game.

Toronto’s Kyle Lowry led all scorers with 33 points, eight rebounds and six assists. After the game, Lowry said the team plays every game like it’s their last.

Against all odds, the Raptors have held on in this series. In Game 3, Toronto faced a potential 3-0 series deficit when OG Anunoby nailed a buzzer-beater three to set the series at 2-1. On Wednesday the team faced elimination, but held true and forced a Game 7 with the series tied 3-3.

For Boston, Jaylen Brown led all scorers with 31 points and 16 rebounds; after the game, he said the team needs to learn from the pain to finish this series.

Additionally, Boston’s Kemba Walker finished the night with just five points and seven assists on 18% shooting, 16% from three-point range. He was the only Celtics starter to not score in double digits. The Celtics’ Marcus Smart finished with a triple-double to top off his excellent playoff performance, hitting a clutch three in the second overtime period.

Boston will look to put away a Toronto team they have struggled to finish off in Game 7 on Friday at 9 p.m. on TNT.

Steven Walker is a beat writer for ESPN Gainesville and is currently studying Journalism & Sports Media at the University of Florida.
@swalker_7
Previous Finding Billy Donovan’s Next Home
Next Kucherov’s Goal in the Final Seconds Puts the Lightning up 2-0