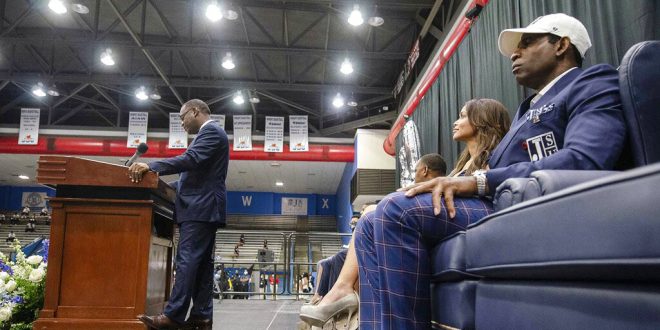 The former cornerback and member of the Pro Football Hall of Fame after a standout NFL career has accepted his first collegiate head-coaching job. Previously, Sanders served as the offensive coordinator at Trinity Christian High School where his son plays quarterback at his alma mater.

Sanders will become the program’s 21st head coach, ironically fitting for the player who donned “21” both in the NFL and MLB.

Joining the Storied Tradition of the Sonic Boom:

The new head coach was overcome with emotion in his introductory press conference on Monday.  Sanders officially joined the HBCU community and the Sonic Boom of the South.

“These are the tears of satisfaction, these are tears of joy and passion,” Sanders said. He shared his excitement to stand before this new community and how proud he is to assume this new role.

The 53-year-old acknowledged the prayers that have filled his journey which led him to take this job and start a new chapter in his career.

Sanders is setting the tone early with the level of competition and success he is expecting,  “I believe the men here can win SWAC championships,” he said.

But beyond success on the field, Sanders has set goals for his team to become pillars in the community and will focus heavily on academic excellence.

Previously, Jackson State went 6-9 last season and 5-5 in the newly named SWAC East. Sanders is replacing John Hendrick who has been with the team since 2018.

The Sonic Boom has not had a winning season since 2013. Jackson State’s season is set to begin in February, after delays due coronavirus. Sanders will finish out the season in Cedar Hill, Texas before assuming his role as Head Coach at Jackson State.