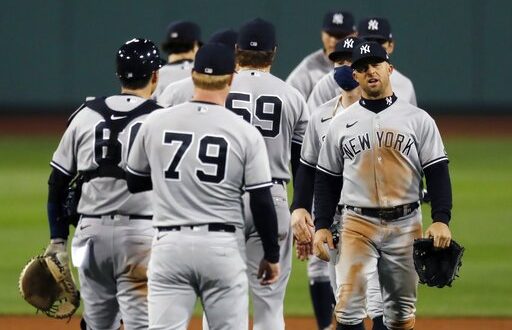 For the fourth straight season, the New York Yankees have clinched a playoff berth for the MLB Postseason.

This will be the third straight postseason appearance under manager Aaron Boone(234-144 since 2018). Last season, the Yankees made it to Game 7 of the ALDS. Controversially, the Bronx Bombers lost to the Houston Astros off a walk-off two-run home run by second baseman Jose Altuve.

After last year’s misfortune, the Yankees enter the postseason knowing what the expectation is, Boone said Tuesday.

The Yankees are 4.5 games back of the AL East-leading Tampa Bay Rays. With two series against the Blue Jays and Marlins left, the Yanks look to steal the AL East title from the Rays.

Over a week ago, the Yankees were 23-21, with playoff chances in doubt. After an 8-2 week, charged by AL MVP candidate Luke Voit, the Yankees have gotten themselves right back in contention.

The Yankees entered the season as heavy favorites for the World Series, opening the season with 7-2 odds to bring the commissioner’s trophy back to the Bronx.

Within one pitch of the World Series last year, Yankees General Manager went all in by signing ace Gerrit Cole to a nine-year $324 million contract this winter. Cashman prepared a fully operational death star, except for one fault that could blow up the empire: injuries.

The Yanks have had 15 different players hit the IL this season, including all-stars Gleyber Torres, Giancarlo Stanton, Aaron Judge and DJ LeMahieu. Additionally, they have missed three pitchers from a once loaded rotation: James Paxton, Masahiro Tanaka and former ace Luis Severino.

Since reaching a 23-21 record, the New York Yankees have gone 8-2 in their last 10 games outscoring their opponents 73-34. Ace Gerrit Cole has gone 2-0 over that span, with only one earned run and 17 strikeouts. Cole looks to continue his success into the postseason.

First Baseman Voit has looked the part of an MVP candidate during this season-saving 10 game stretch. Voit has hit four home runs and 12 RBI’s over the past 10 games, carrying a loaded lineup hungry for the postseason.

On Sunday, despite losing to divisional rival Boston Red Sox, the Yankees clinched the postseason after the San Diego Padres beat the Seattle Mariners 7-4. This is their fourth straight playoff appearance.

The Yankees are now the five seed in the updated MLB playoff picture. Currently, they’re slated to take on the Minnesota Twins in the Wild Card game. The Bronx Bombers have a chance to fight for an AL East title, but with a win tonight the Rays clinch their first AL East title since 2010.

The Yankees face the Blue Jays tonight with Gerrit Cole on the mound for what should be his final regular-season start of 2020.

Sam Petosa is a Journalism major pursuing a Specialization in Sports and Media at UF. The South Florida native produces daily shows for WRUF, including "Sport Scene with Steve Russell, and "The Tailgate." In addition, Sam provides weekly sports updates for WUFT News and radio Sportscenter's for WRUF radio. Sam has been a writer at ESPN Gainesville since January 2020.
@sampetosa5
Previous Deion Sanders named Jackson State Football Coach
Next Brian Johnson Makes History with Gators