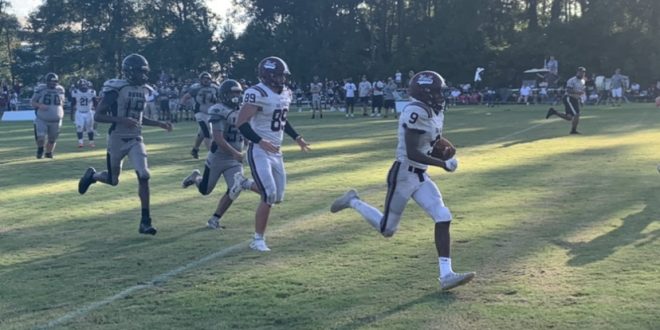 Tuesday, the Oak Hall Eagles (2-0) squared off against the Duval Charter Panthers (2-0) in a game that featured an unusual 4:30 PM kickoff.  The Eagles rolled over the Panthers with ease in a clash that ended 36-6.

To start the game, on their first possession, Oak Hall constructed a nine-play drive that resulted in a score. The methodical drive contained a 4th down conversation via a facemask penalty and was then capped off by a Carter Coleman goal-line touchdown.  This set the tone as the Eagles were virtually unstoppable on the ground for the remainder of the game.

Oak Hall QB Andrew Pickings scored a rushing touchdown, and Coleman had two of his own. Running back Jaylen Scott added 3 more on the ground. The passing game was a non-factor for the Eagles, but the running game proved enough.

Defensively, the domination continued. Oak Hall’s defense was stifling all afternoon, not allowing Duval’s offense to find a rhythm. Eagles Quarterback/Safety Andrew Pickings came down with two key interceptions. Ultimately, the Panthers only points came via a late-game rushing touchdown.

Entering the contest, Duval Charter was expected to give the Eagles one of their toughest challenges of the year, but Oak Hall was too much to handle for the Panthers.

After the game, Eagles star player Andrew Pickins, running mate Jaylen Scott and Head Coach RJ Fuhr had some encouraging team-oriented words.  When Pickins was asked how his athletic running backs make his job easier, he was quick to give his teammates credit. Pickins said “it makes my job really easy.  Those guys work their tails off and our offensive-line too.”

Then, when Jaylen Scott was asked about his team’s dominant performance, the message remained team-first. Scott said “we knew it was going to be a tough team. But we watched film, we worked hard during the week, and it paid off on the game field.”

Finally, head coach RJ Fuhr was excited, but also humble heading into next week’s matchup on Tuesday against City of Life Christian Academy on Tuesday.  Fuhr was quick to give his guys credit, but he also made sure to mention that there is work to be done before next week. “They have got to hydrate,” Fuhr said, “They have to replace everything they lost and then start hydrating for Tuesday.  We have probably going to have a somewhat easy practice on Monday.”

That will do it for today’s game in Jacksonville. After a dominating 38-6 victory over Duval Charter, @OakHallFootball will return to play on Tuesday with a perfect record still intact. @athletics_hall @ESPNGainesville pic.twitter.com/M00p2ASJ7u

With the morale high and the play on the field superb, the Oak Hall Eagles are a major threat to make a deep playoff run.

William Silverman is a sophomore at the University of Florida from Philadelphia who is interested in pursuing a career in communications and journalism.
Previous P.K. Yonge Overcomes Sloppy 2nd Half, Hangs On To Beat Santa Fe
Next Kyle to Kyle Remains Key to Gators