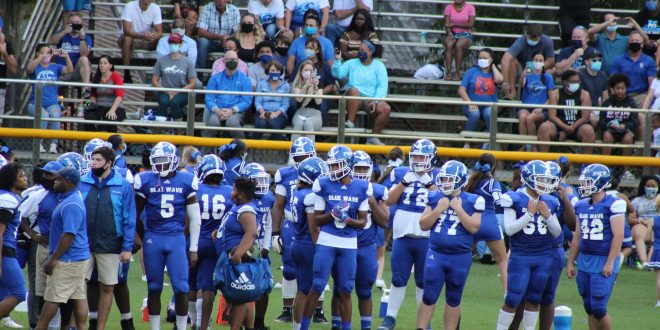 Head Coach Marcus McDonald attributed his P.K. Yonge squad’s ability to win in a close game to their coachability.

“…They’re very coachable…I tell my coaches all the time, if we don’t coach it, they don’t do it.”

The visiting Blue Wave (2-2) came out victorious after a rough going last week at home against Florida High, defeating the Raiders (1-3) 20-13 Friday night.

Going into this week, McDonald had expressed concerns with his team’s discipline coming out of that brutal game against the Seminoles. Friday’s win would change his tone for the better.

“…We were able to correct those things, go back to those things. Kids play their best football when they’re confident in what they’re doing. We just went back to that this week, really focused on us.”

Santa Fe wasn’t PKY’s only opponent this week. In his appearance on Sports Scene with Steve Russell on Wednesday, McDonald explained that his team was fighting to get on the field for practice amid unfavorable weather conditions.

“…Practice has been hard to come by for two weeks in a row for us. We’ve had heat issues, we’ve had lightning issues.”

“…We’re still trying to undo some things…when it gets tough, you’ve got to buckle down and do your fundamentals.”

His team did just that, using efficient offense and active defense to shut down the Raider’s pass-heavy offense.

It proved to be a true tale of two halves, as the score at halftime would not budge thanks to an ugly, penalty-filled finish from both teams.

Devan Mitchum got the scoring started for the home team, capping off Santa Fe’s 11 play, 75-yard opening drive with a short rushing touchdown.

Blue Wave rushers were not far behind, quickly scoring a touchdown of their own via an Isaiah Wilcox rush. Their next two drives, fueled by the legs of quarterback Aaron Small Jr., gave PKY the 20-7 lead they would hold for most of the 2nd quarter.

Santa Fe quarterback Landon Rogers would find the end zone next, connecting with Javon DeCoursey for a 35-yard score with less than a minute left in the half.

Both teams would go scoreless throughout the 3rd and 4th quarters, offenses unable to get any momentum thanks to a heavy dosage of flags.

The difference certainly was on the defensive side of the ball for P.K. Yonge, bringing down Santa Fe ball carriers down behind the line of scrimmage all night long.

Isaiah Wilcox made his mark on the game with 4 sacks, including 2 on the Raiders’ final drive of the 1st half. Chance Brinson and Christopher Strong each added two sacks; Taylor Kendrick and Miles Cooper chipped in one apiece, bringing the Blue Wave total to 10 for the game.

These big plays were not isolated either. PKY had 5 multiple-sack drives, all but killing any momentum the Santa Fe offense had.

“If we coach them through the scenarios and situations, they’re going to perform,” said McDonald. “So really, at the end of the day, it’s on us to make sure that we’re doing our job to make sure that these kids are in the best position for them to be successful.”

There was plenty of unforced chaos as well, both teams unable to keep any of the little yards they gained in the 2nd half.

In all, 26 combined penalties were called between the Blue Wave and the Raiders, 13 on each team. Santa Fe especially suffered, losing almost 120 yards on more serious fouls such as unsportsmanlike conduct and chop blocking.

P.K. Yonge was not far behind, being set back 95 yards for the game and earning 10 of their 13 flags in the 2nd half.

P.K. Yonge heads to Class 1A no. 6 Hawthorne (2-0) next week for a pivotal tilt. Head Coach Cornelius Ingram’s Hornets have shown some difficulty scheduling games in Weeks 3 and 4 of the 2020 season.

The Hornets’ game scheduled for Friday night at home against Mount Dora was canceled due to COVID-19 concerns within the Hawthorne program.

Santa Fe will look to rest their bodies and stay healthy next Friday on their bye week. They’ll be back in action on October 9th at Class 1A no. 12 Union County (2-1).

Caleb Wiegandt is a first-year Journalism student on the Sports and Media track in the University of Florida's College of Journalism and Communications. He has previous bylines in USA Today, Yahoo Finance, and The Louisville Courier-Journal before arriving at ESPN Gainesville. Caleb is a proud graduate of Holy Cross High School in southwest Louisville, Kentucky, where he was born and raised. You can reach Caleb at cwiegandt@ufl.edu.
@@CalebWiegandt
Previous Eastside Rams Fall to Buchholz Bobcats
Next Oak Hall Rolls to Victory Over Duval Charter