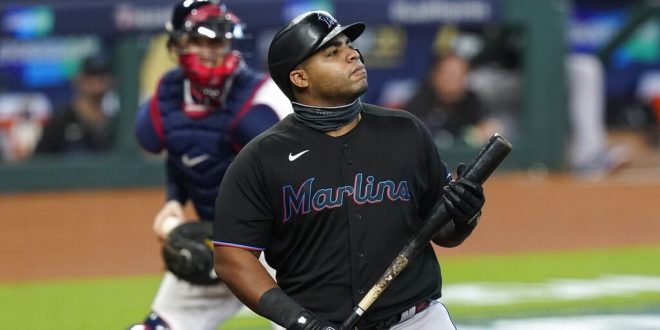 Miami Marlins' Jesus Aguilar reacts after striking out during the eighth inning in Game 2 of a baseball National League Division Series against the Atlanta Braves Wednesday, Oct. 7, 2020, in Houston. (AP Photo/Eric Gay)

The Miami Marlins dropped their second game of the National League Division Series to the Atlanta Braves 2-0 on Wednesday.

The loss puts the Marlins behind in the series 2-0. The Braves only need to win one more game to advance to the National League Championship Series. Game three is on Thursday, Oct. 8 in Houston.

In the loss, the Marlins hit three balls in 31 at-bats. Atlanta hit at a slightly better mark, at four hits in 29 at-bats. However, in the Braves two hits, they scored two runs which would be enough to win.

In the box score, both teams were relatively even. Miami and Atlanta only had one error each, and the Marlins actually had more strikeouts than the Braves did.

After the game, Atlanta Braves manager Brian Snitker spoke to the media about his rookie pitcher’s playoff performance.

If the Marlins lose their next game, it will be the first playoff series that the franchise has ever lost. In Miami’s last playoff appearance in 2003, the team won the World Series.

If the Braves win their next game, they will advance to the National League Championship Series for the first time since 2001. The last time Atlanta won a World Series was in 1995.

Steven Walker is a beat writer for ESPN Gainesville and is currently studying Journalism & Sports Media at the University of Florida.
@swalker_7
Previous Rays Take 2-1 Lead Over Yankees
Next Oakland Athletics Are Down But Not Out